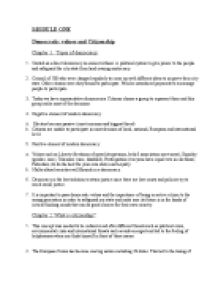 Notes on Citizenship and Democracy.

﻿MODULE ONE Democratic values and Citizenship Chapter 1: Types of democracy. 1. Started as a direct democracy in ancient Athens. A political system to give power to the people and safeguard the city state from land owning aristocracy. 1. Council of 500 who were changed regularly to come up with different ideas to improve their city state. Other citizens were duty bound to participate. Pericles introduced payments to encourage people to participate. 1. Today we have representative democracies. Citizens choose a group to represent them and this group make most of the decisions. 1. Negative element of modern democracy: 1. Electors become passive (most common and biggest threat) 2. Citizens are unable to participate in most decision of local, national, European and international level. 1. Positive element of modern democracy: 1. Values such as Liberty (freedoms of speech/expression, belief, association movement), Equality (gender, race), Tolerance (race, disabled), Participation (everyone have equal vote in elections), Patriotism (to do the best for your own state) and Loyalty 2. Multicultural societies will flourish in a democracy. 1. Democracy is the best solution to attain justice since there are law courts and policies try to reach social justice. 1. It is important to pass democratic values and the importance of being an active citizen to the young generation in order to safeguard our state and make sure its future is in the hands of critical thinking minds that can do good choices for their own country. Chapter 2: What is citizenship? 1. This concept was needed to be rediscovered after different threats such as political crisis, environmental crisis and international threats such as aids emerged and led to the feeling of helplessness when one finds himself in front of these issues. 1. The European Union has become one big nation including 28 states. This led to the losing of frontiers and with the technology of today the citizens became citizens of the world. ...read more.

1. Vince Caruana says that everyone in the world is connected with what we do. We are affected by the choices of other people and other people are affected by ours. Therefore we should understand that when we are choosing something we are influence by what is happening around us and therefore need to develop a skill to respond positively to such influences. 1. All the development and globalization have put the people in a great awareness of what is happening but still it has the be each one of us to care about that and do something about it, not just in our surrounding but all over the world. 1. Educational and experiential programs and activities at local, national and international levels that aim at encouraging young people to develop interest in global issues and the need to involve themselves and do their part in solving such issues. 1. UN stated that 2005-2014 is the decade of instilling sustainable development in young citizens through education. 1. Mr. Ping says that global issues such as AIDS/HIV, terrorism, poverty, wars and environmental problems should be solved by global solutions. Everyone needs to do his part and not just the UN or EU. 1. Civil society and its potential impact on such issues play an important role. Initiatives like Make Poverty History and other NGO?s are good examples of active citizenship. Chapter 10: The Concept in Practice- Local Issues with International Repercussions. 1. Constitution is the guide for democracies to work in favor and help all the citizens. International democracies like EU and UN provide many forums where different governments can share their knowledge and experience on global issues 1. Development in transportation and communication helped in the spreading of political, economic cultural influences. Example when in 2004 the Imnajdra temple were vandalized, not only in Malta but in all Europe there was a call for harsher penalties when caught vandalizing. ...read more.

The mass media helped in the gaining of political consciousness and the press and its political insight gave was another reason for citizens to become literate. 1. Now we have the internet. It brought in our homes thousands of websites from across the world and makes it easier and quicker for people to talk with each other even from a long distance. 1. The phenomenon of the internet couldn?t be censored and so it?s up to the citizens to decide what to belief and what they want from the net. 1. These types of media brought with them a lot of advantages when it comes to inform citizens and educate them but with these advantages some challenges appeared. People started to use to much of such media leading to R.S.I?s and abuse of children is just a click away. Chapter 15: The Concept in Practice: Legal and Illegal Immigration and its Immediate Long Term Effects. 1. Lately the number of boats with illegal immigrants entering our coasts has increased dramatically. This is due to the fact that they find themselves in a bad situation and forced to leave their country. 1. Unfortunately most of the Maltese people are becoming more racists and we often here racist comments when we see a dark skinned man/woman working because people see them as threat. 1. This also brought fear of international terrorism and so policies that limit the freedom of new arrivals and even state control over the points of entry had to be implemented. 1. Such control didn?t have the wanted effect. On the contrary there was an increase in criminal traffic of illegal immigrant. 1. The big migration is seen as threat to the identity hold dear by most of the Europeans. It creates anxiety about the new changing world. 1. Students should be encouraged to practice diversity. Rather then just distinguish ourselves from other races, we should accept them and learn from their culture. 1. Instead of trying to stop immigration we can try to get most out of it and promote integration which is a profit for both migrant and European citizens. ...read more.