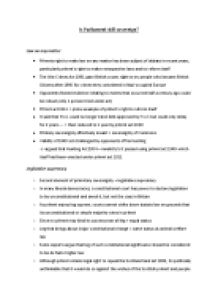 ﻿Is Parliament still sovereign? Law on any matter 1. Prlmnts right to make law on any matter has been subject of debate in recent years, particularly prlmnt?s right to make retrospective laws and to reform itself 2. The War Crimes Act 1991 gave British courts right to try people who became British Citizens after 1990 for crimes they committed in Nazi-occupied Europe 3. Opponents feared evidence relating to events that occurred half a century ago could be robust (only 1 person tried under act) 4. Prlmnt act 1911 = prime example of prlmnt?s right to reform itself 5. It said that H o L could no longer block bills approved by H o C but could only delay for 2 years --- > then reduced to 1 year by prlmnt act 1949 6. Prlntary sovereignty effectively meant = sovereignty of Commons 7. Validity of 1949 act challenged by opponents of fox hunting ? argued that Hunting Act 2004 = invalid b/c it passed using prlmnt act 1949 which itself had been enacted under prlmnt act 1911 Legislative supremacy 1. ...read more.

The key example was provided in the 1990/91 Factortame case which resulted in Merchant Shipping Act 1998 being disapplied because its provisions restricting the non-british fishing boats as British were contrary to Community law 6. Recognition by British Courts of the primacy of EU law fits uneasily with the legislative supremacy of prlmnt 7. But prlmntary sovereignty has not been rendered entirely meaningless 8. Prlmnt retains right to repeal the European Communities Act 1972, although this would present political difficulties such as negotiating the terms of withdrawal The Human Rights Act 1. The rule of law provides a defence against the abuse of power by the state, but it lacked the constitutional protection common in other liberal democracies until Human Rights Act 1998 2. This incorporated the rights set out in Articles 2 to 12 and Article 14 of the European Convention on Human Rights (ECHR) into UK statute law 3. ...read more.

The UK prlmnt can also abolish the devolved Assemblies and decide to legislate on Scottish, Welsh, and Northen Irish matters, but it would be politically difficult to do so in the face of elite and public opposition 7. Relations between the UK gov and devolved administrations have been cordial to date, but strains might become apparent now that a Scottish National Party minority gov is in office in Edinburgh Referendums 1. Referendums have emerged as a popular option for the gov on major constitutional issues 2. Only one UK wide referendum has been held, 1975 vote in favour of continued membership of the European community 3. But the devolved assemblies in Scotland, Wales, and NI were all approved in refs in their respective nations 4. The Blair gov proposed refs on the European single currency and the EU constitution abonded them when first, it decided against joining the euro and second, following negative verdicts on the EU constitution in France and the Netherlands, shelved plans for a referendum on ratifying the constitution ________________ 1. ...read more.