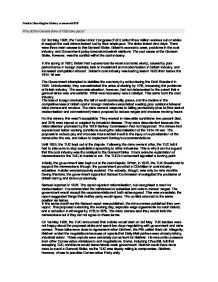 On 3rd May 1926, the Trades Union Congress (TUC) called three million workers out on strike to support the coal miners locked out by their employers.

On 3rd May 1926, the Trades Union Congress (TUC) called three million workers out on strike to support the coal miners locked out by their employers. The strike lasted nine days. There were three main causes to this General Strike: Britain's economic crisis, problems in the coal industry, and Government policy towards industrial relations. The root cause of the General Strike, however, was the conflict within the coal industry. In the spring of 1920, Britain had experienced its worst economic slump, caused by poor performance in foreign markets; lack of investment and modernization in British industry, and increased competition abroad. Britain's coal industry was trading less in 1925 than before the 1914-18 war. The Government attempted to stabilise the economy by reintroducing the Gold Standard in 1925. Unfortunately, they overestimated the value of sterling by 10%, increasing the problems of British industry. The economic situation, however, had not deteriorated to the extent that a general strike was unavoidable. ...read more.

This is why it can be argued that the coal industry was the catalyst to the General Strike. It took extreme exploitation of mineworkers for the TUC to decide to act. The TUC's involvement signalled a turning point. Initially, the government also kept out of the coal dispute. When, in 1925, the TUC threatened to support the mineworkers, though, the government provided a �23million in coal industry subsidies. A strike was temporarily avoided. The subsidy, though, was only for nine months. During this time, the government appointed Samuel Commission investigated the problems of British mining and its low productivity. Samuel reported in 1926. The report rejected nationalisation, but recognised a need for modernisation. It recommended the withdrawal of subsidies and cuts to miners' wages. The government would accept the recommendations if both sides agreed. This was unrealistic: the report suggested things that neither party would agree. The conflict returned to the same position as before. ...read more.

It has been argued that if he had enforced its findings, the General Strike would have been averted. Another view is that implementation of the Samuel report would have worsened the dispute between miners and mine owners. Baldwin could not win. The government's response did not cause the General Strike - but it did nothing to prevent it. The general strike of 1926 was caused by a combination of economic crisis, a crippled coal industry, and a poor government response. British industry was moribund and the government could have reacted more responsibly to the needs of the workers. But these were additional to the underlying conflicts in the coal industry. The miners were extremely unhappy with their dire working conditions and failure to nationalise the industry. They refused to accept lower wages and longer hours. The treatment of the miners made the TUC act. I think that the mine owners' proposals for lower wages and longer hours were the catalyst for the General Strike. If it weren't for that, it would've taken longer or never happened. Frankie Hine-Hughes History coursework 858 Why did the General strike of 1926 take place? ...read more.