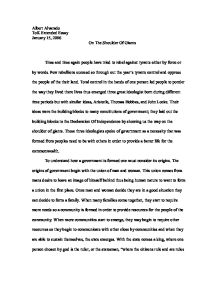 On The Shoulder Of Giants

Albert Alvarado ToK Extended Essay January 15, 2006 On The Shoulder Of Giants Time and time again people have tried to rebel against tyrants either by force or by words. Few rebellions succeed so through out the year's tyrants control and oppress the people of the their land. Total control in the hands of one person led people to ponder the way they lived there lives thus emerged three great ideologist born during different time periods but with similar ideas, Aristotle, Thomas Hobbes, and John Locke. Their ideas were the building blocks to many constitutions of government; they laid out the building blocks to the Declaration Of Independence by showing us the way on the shoulder of giants. These three ideologists spoke of government as a necessity that was formed from peoples need to be with others in order to provide a better life for the commonwealth. To understand how a government is formed one must consider its origins. The origins of government begin with the union of man and woman. ...read more.

In order for a government to ensure absolute protection to its citizens, the citizens must first give up their absolute freedom but in return, obtain peace and security. Peace and security can only come when a powerful government or "leviathan" as is said by Hobbes, emerges. A powerful government or "leviathan" can only emerge when people accept to let one man or one assembly of men to speak on their behalf and give up their rights to them. Having given up rights for protection when done in multitude, becomes the commonwealth, where harmony is achieved through letting one man or one assembly of men decides what is best for the citizens and the citizens must abide by what is said. The commonwealth is protected as long as the government has the power to make and enforce laws. In giving up rights the government protects the citizens' life, liberties, and possessions better than they can independently. John Locke explains how Hobbes was correct in saying that something is needed to be sacrificed in order to protect them from the laws of nature. ...read more.

The shoulders of giants paved the way to the Declaration Of Independence, it says, "When in the course of human events, it becomes necessary for one people to dissolve the political bands...to which the Laws of Nature and of Nature's God entitle them..." God gave them the right to dissolve the contract and the Declaration of Independence explains the reasons why the king violated the contract. Man has unalienable rights which are life, liberty, and the pursuit of happiness, the king did not allow these rights to the citizens so they had God's right to dissolve their connections with them, becoming a free independent nation. A Government is a contract made by ideas that were paved on the shoulders of giants. As was said by Aristotle "For man, when perfected, is the best of animals, but, when separated from law and justice, he is the worst of all...". Humans need government in order to escape the oppression a tyrant would bring to them. Humans form governments out of needs for protection and human nature to be with others for their own good. Without governments life is "solitary, poor, nasty, brutish, and short." As Hobbes put it. ...read more.