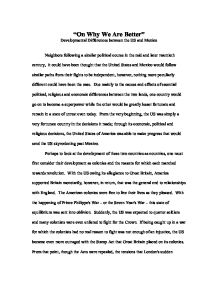 &quot;On Why We Are Better&quot;, Developmental Differences between the US and Mexico.

"On Why We Are Better" Developmental Differences between the US and Mexico Neighbors following a similar political course in the mid and later twentieth century, it could have been thought that the United States and Mexico would follow similar paths from their fights to be independent, however, nothing more peculiarly different could have been the case. Due mainly to the causes and effects of essential political, religious and economic differences between the two lands, one country would go on to become a superpower while the other would be greatly lesser fortunate and remain in a state of unrest even today. From the very beginning, the US was simply a very fortunate country in the decisions it made; through its economic, political and religious decisions, the United States of America was able to make progress that would send the US skyrocketing past Mexico. Perhaps to look at the development of these two countries as countries, one must first consider their development as colonies and the reasons for which each marched towards revolution. With the US owing its allegiance to Great Britain, America supported Britain monetarily, however, in return, that was the general end to relationships with England. The American colonies were free to live their lives as they pleased. ...read more.

power over them, and as the colonies argued whether they would have a national religion, the idea of religion became a huge divisive factor for the new country. Such a fundamental difference would become a crucial difference between the two countries, and this is simply the beginning of the developmental differences between the two countries. Then there was the economic aspect of life in the two countries. From the very beginning, America was in every sense of the phrase a genuine "melting pot." With inhabitants coming from all over Europe, the United States had ties to an entire continent; Mexico on the other hand was founded entirely by the Spanish and as such, could only legitimately turn to that empire for aid. As such, when Mexico decided to break away from Spain and fight for their independence, they were forced to rely on themselves for the majority of support services. Quite contrarily, the US was immediately recognized as a country and aided by several nations overseas, with Morocco and France being the earliest and most notable, respectively. Furthermore, these ties to Europe would prove crucial as the countries began to grow. With the Napoleonic Wars raging, the demand for goods was prevalent, and with the US having these ties to European countries where Mexico lacked, the United States were able to create a strong system of exportation and trade that sent their economy skyrocketing towards success. ...read more.

This lack of a hierarchy also had far-reaching effects on Mexico's political action as well, for with this lack of structure came political leaders from any walk of life. This also meant problems for Mexico, as the leaders would generally turn to military force to rule the countries. Political insurrection was not uncommon at all, and with Mexico's love for military force, these bloody rebellions led to nearly commonplace military coups and heightened the overall sense of political instability that would plague the country for countless years to come. In summation, there were several factors that helped create the two countries we know today as the United States and Mexico. While Mexico emerged from its colonial days with ties only to its motherland of Spain, the US had relationships with many countries in Europe. In turn, the US was able to create a strong trade system and economy while Mexico was forced to rely on inter-continental trade and a struggling economy for success. Furthermore, while the US kept a strong policy of separation of church and state, Mexico allowed extensive debate on establishment of a national religion. These factors, combined with the actual aims of the revolutions of the two countries led to the different trajectories that made the US a highly successful superpower and left Mexico struggling to create a stable economy and government. ...read more.