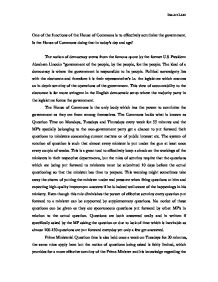 One of the functions of the House of Commons is to effectively scrutinize the government. Is the House of Commons doing that in today's day and age? The notion of democracy stems from the famous quote by the former U.S President Abraham Lincoln "government of the people, by the people, for the people. The ideal of a democracy is where the government is responsible to its people. Political sovereignty lies with the electorate and therefore it is their representative's i.e. the legislature which ensures an in depth scrutiny of the operations of the government. This view of accountability to the electorate is far more stringent in the English democratic setup where the majority party in the legislature forms the government. The House of Commons is the only body which has the power to scrutinize the government as they are from among themselves. The Commons holds what is known as Question Time on Mondays, Tuesdays and Thursdays every week for 55 minutes and the MP's specially belonging to the non-government party get a chance to put forward their questions to ministers concerning current matters or of public interest etc. ...read more.

Prime Ministerial Question time is also held once a week on Tuesdays for 30 minutes, the same rules apply here but the notice of questions being asked is fairly limited, which provides for a more effective scrutiny of the Prime Minister and his knowledge regarding the entire government policy is put to the test. The questions put forward to him are of a general nature, focusing on issues on a national level. Otherwise specific questions, if asked, are then put forward to the concerned minister during his question time. Question Time does have its flaws, as any person is allowed to ask a question an MP of the Prime Minister's own political party may be planted to put forward a question. As Prime Ministerial Question time is being aired on national television the planted question is asked just to make him look good in the eyes of the electorate. This completely defeats the purpose of such an exercise and makes a mockery of the proceedings. Private Notice Questions are oral questions which are put forward to ministers without having to follow the rules of giving notice. These questions are normally on urgent matters or of public importance. ...read more.

The sole discretion to adjourn proceedings and allow a 3 hour debate on issues of national importance is upon the Speaker of the House, which like private notice questions is hardly ever given. Select Committees are formed under the Standing Order of the House. There are many different committees formed for specialized fields. For instance there are committees on Human Rights, European Legislation Committee and Accommodation and Works Committee. By convention these committees are made up of back benchers of the political parties sitting in the Commons. The proportion of the MP's in these Select Committees is the same proportion of the political parties in the House of Commons. Therefore the party in government will always have a majority in the Select Committee aswell. A system such as this defeats the purpose of the entire scrutiny as party members in blind faith would allow Bills to be passed proposed by the Government. Most backbenchers are trying to prove their allegiance to their parties and thus do not really encumber the progress of legislation. The processes by which the Commons examines the governments working is therefore satisfactory to a certain extent but party politics play an important role in hindering effective and authentic scrutiny. IBAAD LARI ...read more.