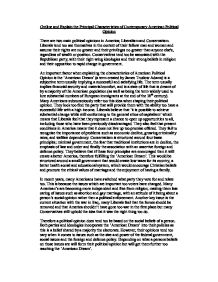 Outline and Explain the Principal Characteristics of Contemporary American Political Opinion There are two main political opinions in America; Liberalism and Conservatism. Liberals tend too see themselves in the context of their fellow man and women and assume their rights are no greater and their privileges no greater than anyone else's, regardless of wealth or position. Conservatives tend too be associated with the Republican party, with their right-wing ideologies and their strong beliefs in religion and their opposition to rapid change in government. An important factor when explaining the characteristics of American Political Opinion is the 'American Dream' (a term created by James Truslow Adams) is a subjective term usually implying a successful and satisfying life. ...read more.

They also feel that present conditions in America means that it does not live up too promise offered. They fail to recognise the importance of problems such as economic decline, growing criminality rates, and welfare dependency. Conservatism is structured around four basic principles; minimal government, the fear that traditional institutions are in decline, the emphasis of law and order and finally the association with an assertive foreign and defence policy. They believe that if these four principles are encouraged then it will create a better America, therefore fulfilling the 'American Dream'. This would be structured around a small government that would create low taxes for its country, a better health social and educational system, which would encourage Christian beliefs and promote the ethical values of marriage and the enjoyment of having a family. ...read more.

Another key issue is the current situation with the war in Iraq, many Liberals feel that the forces should be removed and that America shouldn't have gone too war in the first place but many Conservatives still uphold the idea that it was the right thing too do. Therefore a political opinion does tend too be based on the social beliefs of a person. Both parties and ideologies incorporate the 'American Dream' into their policies as this is a belief shared by a majority the electorate. However, their opinions tend too vary when it comes to issues such as the size and power of the federal government, social issues and the foreign and defence policy. Depending on what a persons beliefs on those issues are will form their political opinion but will get them further too reaching the 'American Dream'. ?? ?? ?? ?? ...read more.