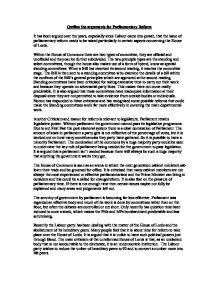 Outline the arguments for Parliamentary Reform.

Outline the arguments for Parliamentary Reform It has been argued over the years, especially since Labour came into power, that the issue of parliamentary reform needs to be raised particularly in certain aspects concerning the House of Lords. Within the House of Commons there are two types of committee, they are official and unofficial and they can be further subdivided. The two principle types are the standing and select committees, though the house also makes use of a form of hybrid, know as special standing committees. When a Bill has received its second reading, it reaches the committee stage. The Bill is then sent to a standing committee who examine the details of a bill within the confines of the Bill's general principles which are approved at the second reading. ...read more.

Another Criticism and reason for reform is relevant to legislature. Parliament retains legislative power. Without parliament the government cannot pass its legislative programme. Due to out First Past the post electoral system there is a clear domination of Parliament. The amount of seats in parliament a party gets is not reflective of the percentage of votes, but it is worked out on how many constituencies they party have gathered. So it is possible to have a minority Parliament. The domination of the commons by a huge majority party could be seen to undermine the key role of parliament being needed for the government to pass legislation. It is argued that a parliament isn't needed because there will always be such a huge majority that anything the government wants they get. ...read more.

Parliament was regarded an effective body and much of the work is done by committees rather than on the floor, but often the debates are controlled or cut short. Only recently has question time been reduced to once a week, which makes the PMs and MPs bombardment predictable and less scrutinising. Recently the Labour party has been dealing with the matter of the House of Lords and the abolishment of its hereditary peers. Many people feel that it is about time for reform to take place over the House of Lords. It is argued that it is unfair to have such political powers just through blood. The main criticism of the unreformed House of Lords is that, as an unelected body that is not accountable to the electorate, it is an undemocratic institution. The Labour party wishes to reduce the umber of hereditary peers to 92 and to convert a number more into life peers. ...read more.