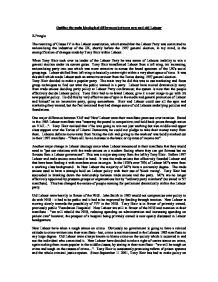 Outline the main ideological differences between new and old Labour.

Outline the main ideological differences between new and old Labour B.Pringle The rewriting of Clause IV in the Labour constitution, which stated that the Labour Party was committed to nationalising the industries of the UK, shortly before the 1997 general election, in my mind, is the exemplification of changes made by Tony Blair within Labour. When Tony Blair took over as leader of the Labour Party he was aware of Labours inability to win a general election under its current guise. Tony Blair transformed Labour from a left wing, tax increasing, nationalising party into one which was more attractive to across the broad spectrum of the UK's social groupings. Labour shifted from left wing to basically centre-right within a very short space of time. It was this shift which made Labour such an attractive saviour from the Tories during 1997 general election. Tony Blair decided to make a popular party. The main way he did this was to use marketing and focus group techniques to find out what the public wanted in a party. ...read more.

It was the trade unions that effectively founded Labour and that have been feeding it with members since its origin. In the 1920's over 70% of Labour MP's were from a working class background. In New Labour the majority of MP's have a university degree. The trade unions used to have a strangle hold on Labour policy with their use of 'block voting'. Tony Blair has succeeded in breaking down the relationship between trade unions and the party. MP's are no longer effectively appointed by pressure groups or organisations but by "ordinary party members" (as stated in '97 manifesto). This has changed the nature of people running for parliament dramatically within the Labour party. Old Labour were heavily in favour of the NHS. John Smith in 1983 would not compromise over policy to do with NHS - it had to be public and it had to be improved by funding through taxation. New Labour is moving slowly towards the possibility of PPP in the NHS. ...read more.

Even today Labour's line on European issues such as the Euro Dollar is unclear. Even so, New Labour are distinctly more pro-European than Old Labour despite all the bickering which goes on between Labour MP's. In the 1997 Labour manifesto the Tony Blair makes it clear that Britain shall continue to try and climb the ladder of influence in Europe - "We will give Britain the leadership in Europe which Britain and Europe need". This is in stark contrast to the 1983 Labour manifesto which expresses deep dislike of the EEC and promises to - "introduce the necessary legislation, to prepare for Britain's withdrawal from the EEC...". Tony Blair is now firmly in favour of the EEC, this highlights dramatically the extent to which Blair has changed the Labour Party. Labour has changed dramatically since Tony Blair's renovation of the Party. Even though the party do still implement the occasional 'old' Labour policy, New Labour would find it hard to argue convincingly that they anything left of centre. But anyone would find it hard to argue convincingly that New Labour are anything but a vastly popular party - despite turning their back on the values of their predecessors. ...read more.