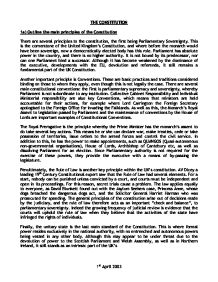 Outline the main principles of the Constitution.

THE CONSTITUTION 1a) Outline the main principles of the Constitution [YN1] There are several principles to the constitution, the first being Parliamentary Sovereignty. This is the cornerstone of the United Kingdom's Constitution, and where before the monarch would have been sovereign, now a democratically elected body has this role. Parliament has absolute power in the country, and there is no higher authority. It is not bound by its predecessor, nor can one Parliament bind a successor. Although it has become weakened by the dominance of the executive, developments with the EU, devolution and referenda, it still remains a fundamental part of the UK Constitution. Another important principle is Conventions. These are basic practices and traditions considered binding on those to whom they apply, even though this is not legally the case. There are several main constitutional conventions: the first is parliamentary supremacy and sovereignty, whereby Parliament is not subordinate to any institution. Collective Cabinet Responsibility and Individual Ministerial responsibility are also key Conventions, which means that ministers are held accountable for their actions, for example where Lord Carrington the Foreign Secretary apologised to the Foreign Office for invading the Falklands. As well as this, the Monarch's Royal Assent to legislation passed by Parliament and the maintenance of conventions by the House of Lords are important examples of Constitutional Conventions. ...read more.

There are many constituents to it: statute and common law, constitutional conventions, treaties and laws of the EU and works of authority. Combining these are difficult, firstly due to the immense size of any sort of binding of all these documents, and secondly because of the difficulty in actually finding them to put together. 2a) Summarise the main features of devolved government in Scotland and Wales[YN4] Professor Vernon Bogdanor described devolution as "the dispersal of power from a superior to an inferior political party", whereby power is delegated from the centre, with out compromising their power. Devolution in the UK has most recently taken place within Scotland and Wales, after referenda in 1997, and in 1999, the Scottish Parliament and the Welsh Assembly were implemented. In Scotland, 74.3% of those voting were in favour of the Parliament (45% of whole electorate), and 63.5 percent were in favour of tax raising powers. However in Wales, only 50.3% votes yes, only a quarter of the population in numbers actually voted for it, with just 6721 votes difference. In Scotland there is a very powerful Parliament. It has tax-varying powers, or more generally has financial and administrative power, and control of monetary systems. ...read more.

Devolution does not involve the sharing of sovereignty, as even though power is taken away from the government, this can be retained at any point. However, within a federalist government, sovereignty must be compromised, as power is constitutionally put in the hands of the local governments. There are other distinctions, for example federalism requires that the regional and national governments have clearly-defined responsibilities which they carry out independently of each other, whereas devolution often requires the state working with the regional devolved government. [YN1]Parliamentary Sovereignty, Rule of Law, Separation of Powers (Technically but not really) [YN2]Rigidity, Inflexibility, gets out of date, partisan, problems with entrenchment [YN3]Constitution defines the roles of the three organs of the state, and the relationship between them. Also the relationship between the state and the citizens. [YN4]Fixed term Parliaments, Regional based AMS system... better representation for the conservatives, Scotland has greater power, law making power, Wales is an administrative assembly. Scotland responsible for education, health, taxation to some extent. Jack McConnal is the First Minister in Scotland, Rhodri Morgan is First Minister in Wales. Both are Lib-Lab Coalitions, with nationalists as the opposition. [YN5]Not a minority government anymore... now a Lib-Lab Coalition [YN6]It is a BRITISH politics paper - therefore don't write all about America... More needs to be written about the European Debate - Euro-federalism [YN7]Westminster retains overall control. Use European examples rather than American comparisons. 1st April 2003 ...read more.