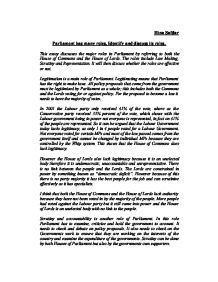 Parliament has many roles - Identify and discuss its roles.

Hina Safdar Parliament has many roles. Identify and discuss its roles. This essay discusses the major roles in Parliament by referring to both the House of Commons and the House of Lords. The roles include Law Making, Scrutiny and Representation. It will then discuss whether the roles are effective or not. Legitimation is a main role of Parliament. Legitimating means that Parliament has the right to make laws. All policy proposals that come from the government must be legitimised by Parliament as a whole; this includes both the Commons and the Lords voting for or against policy. For the proposal to become a law it needs to have the majority of votes. In 2001 the Labour party only received 41% of the vote, where as the Conservative party received 33% percent of the vote, which shows with the Labour government being in power not everyone is represented, in fact on 41% of the people are represented. So it can be argued that the Labour Government today lacks legitimacy, as only 1 in 4 people voted for a Labour Government. Not everyone voted for certain MPs and most of the law passed comes from the government itself and cannot be changed by individual MPs because they are controlled by the Whip system. This shows that the House of Commons does lack legitimacy. However the House of Lords also lack legitimacy because it is an unelected body therefore it is undemocratic, unaccountable and unrepresentative. There is no link between the people and the Lords. The Lords are constrained in power by something known as "democratic deficit". ...read more.

The House of Lords is very good at scrutinising the government because they have plenty of time to look through proposed policy and analyse it, making amendments where they feel necessary. Overall I think that this role is quite effective because select committees can break party lines and act independently, Ministers and civil servants do appear in Parliament and the government is compelled to present all policies to parliament. However a lot of information is hidden away by the government, so it is difficult to scrutinise. Party loyalty can stop proper criticisms and Parliament lacks in research facilities. Representation is another role of Parliament. Representation is about representing the people of Britain in parliament effectively, because they voted for certain people to be there on their behalf. The House of Commons has to represent their constituency. This is not very effective at all because half the House of Commons come from a professional background whereas only 10% of the people come from professional background. This is disproportionate. However most of the House of Commons are middle aged, middle classed white men because selectors are unlikely to choose candidates who do not conform to the stereotypical voter. The job is well educated therefore it needs a well educated person to do it. It requires many skills like good communication. The House of Commons should be fairly represented because it means that policy is approved by the country as a whole. Policy is legitimate. It would improve political participation. The government's power would be decreased and there would be a better redress of grievances for the minority groups. ...read more.

A role which is carried out by only the House of Lords is the Judiciary function. The law Lords accept cases that have been referred to them by the Court of Appeal. This is a reactive court not a proactive one. The Supreme Court looks at about 1,500 cases a year by 5 Law Lords out of a total 12 each time. The Judiciaries can be argued as in being neutral and fair because it looks after the rights of the people and freedoms. It can also be said that it is independent because the decisions made are not based on policy they are based on law. However the law lords are politically appointed by the Prime Minister or the Lord Chancellor. So some appeals could be biased depending on the type of people they are for example, because most judges' senior judges are whit, elite and elderly they will naturally be harsher towards different sections of society. Overall I think that the judicial function of the House of Lords is biased, unfair and ineffective. Overall I think that Parliaments roles are carried out effectively because both Houses of Parliament have the rights to object to law proposals to scrutinize and to represent the people effectively. But it is obvious that the UK is not ran democratically because it is not the party with the majority of votes that rules it, parliament does not scrutinise effectively because of loyalty. It is heavily controlled by the whip system and there is not enough time for everything to be done properly. I think that if the people in the Houses of parliament acted independently and were not controlled by whips, the UK would be more democratic. ...read more.