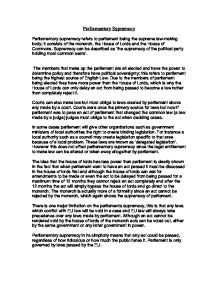 Parliamentary Supremacy - parliament as the supreme law-making body, consisting of the monarch, the House of Lords and the House of Commons

judges must oblige to the act when deciding cases. In some cases parliament will give other organizations such as government ministers of local authorities the right to create binding legislation. For instance a local authority such as a council may create legislation specific to that area because of a local problem. These laws are known as 'delegated legislation'. However this does not affect parliamentary supremacy since the legal entitlement to make law can be altered or taken away altogether by parliament. The idea that the house of lords has less power than parliament is clearly shown in the fact that when parliament want to have an act passed it ...read more.

The monarch is actually more of a formality since an act cannot be rejected by the monarch, which again shows the supremacy of parliament. There is one major limitation on the parliaments supremacy, this is that any laws which conflict with EU law will be void in a case and EU law will always take precedence over any laws made by parliament. Although an act cannot be rendered void by the house of lords of the monarch acts can be voted out, either by the same government or any latter government in power. Parliamentary supremacy in its simplicity means that any act could be passed, regardless of how ridiculous or how much the public hates it. Parliament is only governed by laws passed by the EU. ...read more.