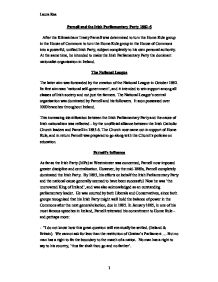 Parnell and the Irish Parliamentary Party 1882-5 After the Kilmainham Treaty Parnell was determined to turn the Home Rule group in the House of Commons to turn the Home Rule group in the House of Commons into a powerful, unified Irish Party, subject completely to his own personal authority. At the same time, he intended to make the Irish Parliamentary Party the dominant nationalist organisation in Ireland. The National League The latter aim was forwarded by the creation of the National League in October 1882. Its first aim was 'national self-government', and it intended to win support among all classes of Irish society and not just the farmers. The National League's central organisation was dominated by Parnell and his followers. It soon possessed over 1000 branches throughout Ireland. This increasing identification between the Irish Parliamentary Party and the cause of Irish nationalism was reflected - by the unofficial alliance between the Irish Catholic Church leaders and Parnell in 1885-6. The Church now came out in support of Home Rule, and in return Parnell was prepared to go along with the Church's policies on education. Parnell's influence As far as the Irish Party (MPs) at Westminster was concerned, Parnell now imposed greater discipline and centralisation. However, by the mid-1880s, Parnell completely dominated the Irish Party. By 1885, his efforts on behalf the Irish Parliamentary Party and the national cause generally seemed to have been successful. ...read more.

This avoided the complicated problem of deciding what debates they should be allowed to attend of they remained members of the House of Commons. The second Bill The second Bill consisted of a land purchase scheme by which the British Treasury would buy out the landlords at a cost of some �50 million. Gladstone believed this was essential in order to prevent the new Irish legislature being burdened at the outset with the problems of the Irish land system.The Prime Minister presented his Home Rule Bill to the House of Commons on 8 April 1886. The Land Purchase Bill was soon abandoned when it became apparent that it was unpopular with all sections of opinion in the House. The debates which followed centred therefore on the provisions concerning the government of Ireland. Gladstone elaborated in greater detail the main reasons which had led him to adopt Home Rule, and the solutions he proposed. Reaction to the Bill The bulk of the members of the Parliamentary Liberal Party supported Gladstone. Parnell had doubts about some of the details, particularly the financial provisions, which he believed were unfair to Ireland; but he supported the Home Rule Bill. 'I accepted the Bill', he pronounced and I believe the Irish people will accept it'. But the Bill was bitterly attacked by the Conservatives, and by many leading Liberals, such as Joseph Chamberlain. ...read more.

Parnell's achievements Charles Stewart Parnell was a controversial figure in his lifetime, and he has remained so ever since. Yet most historians are now agreed on the nature of his contribution to Anglo-Irish history. For though Parnell was associated with the Land League, he was pre-eminently a practical politician than an agrarian reformer. In the political field his achievement was two-fold. Making Home Rule a realistic aim. He turned the question of Home Rule from a vague ideal into practical politics. By his belief that it must be worked for and could be achieved constitutionally through the British parliament. Parnell was eventually able to convince the majority of the Irish people that Home Rule was both a just and a feasible solution to the problem of Irish government. Moreover, it was his consistent and convincing support for Home Rule - that helped to clinch Gladstone's conversion to that cause. Uniting the Irish Parliamentary Party Parnell's second great political achievement: his creation of a united, disciplined Irish Parliamentary Party backed up by an efficient electoral machine in Ireland itself. The Irish Party under Parnell's leadership played a key role in British politics and in the history of the Irish question during the 1880s. After Parnell's death in 1891 the Irish Parliamentary Party - divided and leaderless - was only a shadow of its former self. ?? ?? ?? ?? Laura Rea 1 ...read more.