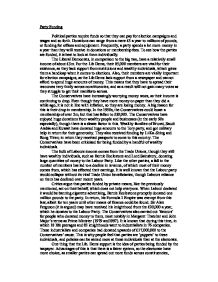 Party Funding Political parties require funds so that they can pay for election campaigns and wages and so forth. Donations can range from a mere �5 a year to millions of pounds, or funding for offices and equipment. Frequently, a party spends a lot more money in a year than they will receive in donations or membership fees. To see how the parties are funded, it is best to look at them individually. The Liberal Democrats, in comparison to the big two, have a relatively small income of about �3m. For the Lib Dems, their 85,000 members are vital for their existence, as they lack support from institutions and wealthy individuals, which gives them a handicap when it comes to elections. Also, their members are vitally important for election campaigns, as the Lib Dems lack support from a newspaper and cannot afford to spend huge amounts of money. This means that they have to spread their resources very thinly across constituencies, and as a result will not gain many votes as they struggle to get their manifesto across. ...read more.

Sir Alex Ferguson (it is argued) may have received his knighthood from the �20,000 a year, which he donates to the Labour Party. The Conservatives also carried out 'favours' for people who donated money to them, most notably in Margaret Thatcher and John Major's terms as Prime Minister (1979 and1997). It is known that during this time, in which 18 life peerages and 82 knighthoods went to industrialists in 76 companies. These industrialists and companies had donated upwards of �17,000,000 to the Conservatives' cause. This is why people feel that parties are 'puppets' to these individuals, and policies can be aimed more at these individuals than at the electorate. One thing that the Lib. Dems support is the idea of parties being funded by the taxpayer. Advantages of this is that there is a fairer system, so the electorate have more choice, as smaller parties can spread out more funds across constituencies, which will increase the democratic system in Britain, as more smaller parties can be better represented. There are problems with this, as some people will want their tax money to go to a certain party, which could result in a more complex system. ...read more.

A newspaper can also give priceless support for your party, which could gain more votes. In general elections, the parties are now allowed to spend a maximum of �30,000 per constituency, and �40,000 for the national assembly of Wales. Though, this act has only just been introduced, so parties have been spending freely. The idea of these limits is to allow each party to spend a maximum of �19,230,000; perhaps so that the parties do not try to receive funding from sleazy characters (i.e. Richard Desmond-Porn entrepreneur) and therefore the parties have to do less 'favours' for their donors. It has to be said, that spending from all three main parties in 2001 is more than 50% less than the spending in 1997, which could be down to Labour's majority, and if that trend continues, there would be no political parties, except ones that are bankrolled by an ambitious businessman. This is perhaps why state funding for parties has come into question more, as parties rely more on wealthy individuals than on their members (except the Liberal Democrats). Labour have already suffered a blow as the Rail, Maritime and Transport Union has withdrawn its funding, due to disagreements with some Labour policies, and other Unions (i.e. the FBU) could follow suit. ...read more.