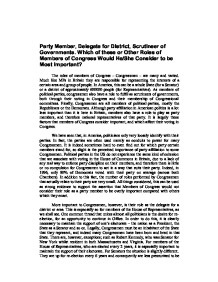 Party Member, Delegate for District, Scrutineer of Governments. Which of these or Other Roles of Members of Congress Would He/She Consider to be Most Important?

Party Member, Delegate for District, Scrutineer of Governments. Which of these or Other Roles of Members of Congress Would He/She Consider to be Most Important? The roles of members of Congress - Congressmen - are many and varied. Much like MPs in Britain they are responsible for representing the interests of a certain area and group of people. In America, this can be a whole State (for a Senator) or a district of approximately 600000 people (for Representatives). As members of political parties, congressmen also have a role to fulfil as scrutineers of governments, both through their voting in Congress and their membership of Congressional committees. Finally, Congressmen are all members of political parties, mostly the Republicans or the Democrats. Although party affiliation in American politics is a lot less important than it is here in Britain, members also have a role to play as party members, and therefore national representatives of that party. It is largely these factors that members of Congress consider important, and which affect their voting in Congress. We have seen that, in America, politicians only very loosely identify with their parties. ...read more.

This is especially so for members of the House of Representatives, as we shall see. One common thread that unites almost all politicians is the desire for re-election, for an opportunity to continue in Office. In order to do this, it is clearly necessary to maintain the support of one's electorate - the nation as a President, the State as a Senator and so on. Legally, Congressmen must be an inhabitant of the State that they represent, and indeed many Congressmen have been born and bred in that State. There are, however, exceptions; such as Robert Kennedy, who was Senator for New York whilst resident in both Massachusetts and Virginia. For members of the House of Representatives, who are elected every 2 years, it is especially important to maintain the support of their electorate. For Senators the situation is slightly different. They are up for re-election every 6 years and consequently are less pressurized to be constantly satisfying to their State's population. It is evident from the above that a Member's role as a delegate for a district is very important to them. ...read more.

As such, it is important to Congressmen too. To be seen not to be holding these principles in the highest esteem would inevitably result in a severe public backlash - and no re-election. Scrutiny of governments, therefore, is also highly important to Members of Congress. In conclusion, we know that Congressmen have a variety of roles to play. In addition to those mentioned, they perform a legislative function, introducing bills to Congress either of their own accord or on behalf of others, and they liase with pressure groups (extremely important bodies in American politics). A Congressman, however, would argue that his or her most important function is none of these. Technically it may be different, but most important to any Member must be any role that involves either aiding or harming their chances of re-election. To this extent, it must be either their role as a delegate for a district or as a scrutineers of governments. Of these two, the more likely to actually affect one's chances of re-election is naturally the delegatory function, and it is for this reason that I believe this role to be that which Members of Congress would consider to be their most important. ?? ?? ?? ?? ...read more.