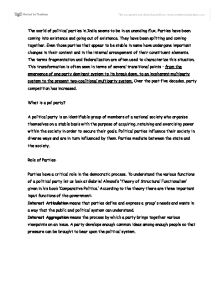 The world of political parties in India seems to be in an unending flux. Parties have been coming into existence and going out of existence. They have been splitting and coming together. Even those parties that appear to be stable in name have undergone important changes in their content and in the internal arrangement of their constituent elements. The terms fragmentation and federalization are often used to characterize this situation. This transformation is often seen in terms of several transitional points - from the emergence of one party dominant system to its break down, to an incoherent multiparty system to the present two-coalitional multiparty system. Over the past five decades, party competition has increased. What is a pol party? A political party is an identifiable group of members of a national society who organise themselves on a stable basis with the purpose of acquiring, retaining and exercising power within the society in order to secure their goals. Political parties influence their society in diverse ways and are in turn influenced by them. Parties mediate between the state and the society. Role of Parties: Parties have a critical role in the democratic process. To understand the various functions of a political party let us look at Gabriel Almond's 'Theory of Structural Functionalism' given in his book 'Comparative Politics.' According to the theory there are three important input functions of the government: Interest Articulation means that parties define and express a group's needs and wants in a way that the public and political system can understand. ...read more.

He says 'the socio-economic and demographic profile of the polity is changing rather fast.....the mobilization of new recruits and groups into the political process.........has given rise to the development of new and more differentiated identities and pattern.' Also for the first time since independence the Congress suffered massive defections, as the Congress leaders who were dissatisfied had other parties to look to or they formed separate parties. New parties like Socialist party, Kisan Mazdoor Praja Party (KMPP), Krishikar Lok Party (KLP), Bangla Congress, Kerala Congress, Jana Congress in Orissa, Swatantra, Bharatiya Kranti Dal, etc were formed. Other parties, rooted in long-standing anti-Congress orientations, also began to gain strength: Shiromani Akali Dal in Punjab, Muslim League in Kerala, DMK in Tamil Nadu, National Conference in Jammu & Kashmir, etc. The Congress split in 1969 was another great blow to the ailing Congress party. Thus in the fifth Lok Sabha elections in 1971 Mrs. Gandhi faced a large opposition. But despite the strong opposition, the Congress party won by a thumping majority. The mid term polls pre-empted the development of a multi party system. It was followed by a strategy to establish hegemony of the Congress at the centre based on populist measures such as 'Garibi Hatao' and the 'ten point program'. After coming to power, Indira Gandhi tended to centralize decision making by weakening institutionalization and creating an overly personalized regime. ...read more.

proved to be in vain. The tri-nodal party system that raised hopes in the 1990s slowly melted away. The formation of alliances and coalition governments at the National and State levels ushered in a new phase in party competition and cooperation. It is amazing that the NDA government at the Centre during 1999-2004 had about 25 partners in it. Deluded by its former glory, the Congress party wanted to come to power on its own. But on the eve of 2004 Lok Sabha elections it finally realized that it could not do so and forged alliances with 16 parties. The ability to rope in the support of the regional and small parties and their electoral performance decided the fate of the National parties. In 2004 elections, a loss of few allies and the poor performance of two or three of its partner State parties resulted in an electoral disaster for the NDA. The reverse saw the Congress forming the government (Yadav, 2004). Thus, the alliance affect became crucial in the defeat and victory of parties at the national and State levels. The Congress allies added about 10 per cent to the UPA, while the BJP allies added about 14 per cent to the NDA (see table 6). At present, there are about 750 registered parties in India, out of which about 50 are recognised as National and State parties. In the 2004 Lok Sabha elections about 230 parties fielded candidates. 40 parties have representation of one or more seats in the House. ...read more.