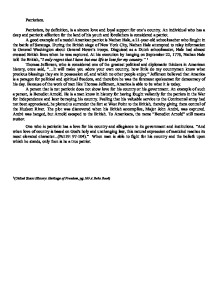 Patriotism - a sincere love and loyal support for one's country

Patriotism. Patriotism, by definition, is a sincere love and loyal support for one's country. An individual who has a deep and patriotic affection for the land of his youth and forefathers is considered a patriot. A good example of a model American patriot is Nathan Hale, a 21-year-old schoolteacher who fought in the battle of Saratoga. During the British siege of New York City, Nathan Hale attempted to relay information to General Washington about General Howe's troops. Disguised as a Dutch schoolmaster, Hale had almost crossed British lines when he was captured. ...read more.

Jefferson believed that America is a paragon for political and spiritual freedom, and therefore he was the foremost spokesman for democracy of his day. Because of the work of men like Thomas Jefferson, America is able to be what it is today. A person that is not patriotic does not show love for his country or his government. An example of such a person, is Benedict Arnold. He is a man know in history for having fought valiantly for the patriots in the War for Independence and later betraying his country. ...read more.

Andr� was hanged, but Arnold escaped to the British. To Americans, the name "Benedict Arnold" still means traitor. One who is patriotic has a love for his country and allegiance to its government and institutions. "And when love of country is based on God's holy and unchanging law, this natural expression of mankind reaches its most elevated character...(Ps119: 97-104)." When man is able to fight for his country and the beliefs upon which he stands, only then is he a true patriot. �(United States History: Heritage of Freedom, pg.109 A Beka Book) ...read more.