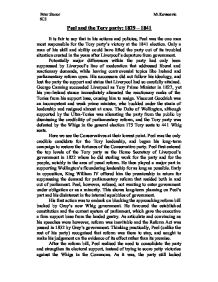 Peel and the Tory party: 1829 - 1841 It is fair to say that in his actions and policies, Peel was the one man most responsible for the Tory party's victory at the 1841 election. Only a man of his skill and ability could have lifted the party out of its troubled situation created in the years after Liverpool's departure from government. Potentially major differences within the party had only been suppressed by Liverpool's line of moderation that addressed liberal and reactionary demands, while leaving controversial topics like Ireland and parliamentary reform open. His successors did not follow his ideology, and lost the party the support and status that Liverpool had so carefully attained. George Canning succeeded Liverpool as Tory Prime Minister in 1827, yet his pro-Ireland stance immediately alienated the reactionary ranks of the Tories from his support base, causing him to resign. Viscount Goodrich was an incompetent and weak prime minister, who buckled under the strain of leadership and resigned almost at once. The Duke of Wellington, although supported by the Ultra-Tories was alienating the party from the public by dismissing the credibility of parliamentary reform, and the Tory party was defeated by the Whigs in the general election 175 Tory seats to 441 Whig seats. Here we see the Conservatives at their lowest point. Peel was the only credible candidate for the Tory leadership, and began his long-term campaign to restore the fortunes of the Conservative party. ...read more.

Although little was achieved in terms of legislation, it showed the progress made by the Tory party in reclaiming much of their previous status. It also showed the Tory party had backed a winner in the form of Peel. He performed with skill, competency and confidence as the Prime Minister for his short period of office. He had to step down, however, as the Whigs, Radicals and Irish formed the Lichfield House Compact in March 1835, uniting the Opposition under one banner. With such an overwhelming minority in government, Peel chose to resign from office, and so Melbourne was re-appointed as premier in 8th April 1835. However, this did not dishearten the Tory party, and even the grumbling Ultras relented to Peel's leadership. It was becoming clear that Peel would soon re-enter government as the Prime Minister once a solid Tory majority had been formed. It was becoming apparent around this time that the influence of the Whigs was on the decline. The radicals and Irish dissenters were pushing the Whig party down paths that the majority of the electorate wanted closed. Lord John Russell's Irish Tithe Bill among others turned devout Anglicans and deep-rooted Establishment supporters to the Tory party, where Peel still prized the relationship between the Anglican Church and the State. The King was starting to tire of the Whigs, and he and all the influence he commanded were now behind Peel. ...read more.

Yet it seemed that it was the failings of the Whig party that really gave the Tory party the country. The Whigs had alienated almost all prominent sectors of support from their ranks. Their dealings with Ireland gave them added support in Ireland, yet turned away many devout Anglican voters. The questioning of the Corn Laws gave everyone earning from domestic agriculture a reason to choose Peel over the Whigs. Their mishandling of the economy and the failings of the 1832 Whig Reform Act rallied the working classes and their middle class leaders against them through Chartism. The huge budget deficit humiliated Melbourne to the extent that few of the electorate could see anything worth voting for in him. For all Peel made of the middle class vote, historians such as Paul Adelman have pointed out that votes came from the traditional areas of Southern England and Wales rather than the industrial North, suggesting a lack of enthusiasm or confidence from the majority of the middle class industrialists. Peel did offer a welcome alternative to the incompetency of the Whigs, but the majority of votes were from the traditional Tory bastions such as supporters of the Establishment, the Monarchy, the Church and the landed gentry, that almost always voted ambiguously for the Tory party. Votes from new areas were on the whole fuelled by a general dislike of the stale Whig party and their Irish and radical associations, rather than what Peel and his modern breed of Conservatism stood for. Peter Stonor Mr.Kovacevic 6C3 ...read more.