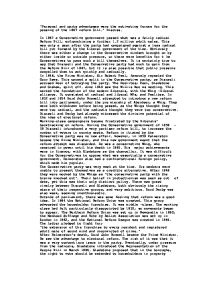 'Personal and party advantages were the motivating forces for the passing of the 1867 reform bill.' Discuss.

'Personal and party advantages were the motivating forces for the passing of the 1867 reform bill.' Discuss. In 1867 a Conservative government passed what was a fairly radical Reform Bill, enfranchising a further 1.2 million adult males. This was only a year after the party had campaigned against a less radical bill put forward by the Liberal government of the time. Obviously there was either a change in the Conservative mindset brought on by either inside or outside pressure, or there were benefits for the Conservatives to pass such a bill themselves. It is certainly true to say that Disraeli and the Conservative party had much to gain from the Reform Bill of 1867, but it is also possible that public pressure compelled them to act quickly and radically. In 1846, the Prime Minister, Sir Robert Peel, famously repealed the Corn Laws. This caused a split in the Conservative party, as Disraeli accused Peel of betraying the party. The Peelites; Peel, Gladstone and Graham, split off. June 1849 saw the Willis Rooms meeting. This marked the foundation of the modern Liberals, with the Whig-Liberal alliance. It consisted of radical and liberal MPs, and Peelites. In 1852 and 1854 Lord John Russell attempted to introduce a new reform bill into parliament, under the premiership of Aberdeen, a Whig. ...read more.

Disraeli himself seemed to make it clear to Derby in 1866 that his main aim was to outmanoeuvre the Liberals; 'We are entirely unpledged upon the subject [of Parliamentary Reform]. But if no notice is taken of it in the Queen's Speech, or no subsequent announcement of measures is made by the Leader of the House of Commons, it is probable that an amendment of a general character may be carried, which will replace the question in the hands of the late Government, and they return to power not more embarrassed by the Radicals than before.' The historian M. Cowling believes strongly in the idea that the Reform Act was a the result of political rivalry; 'the action... was a battle within the political classes to sustain, support and achieve power.' There was a strong uncertainty about how the electorate would vote, and Derby described it as 'a leap in the dark', but the Conservatives, looking back over the last twenty years, may well have felt that they had little to lose. Derby explained that unless the Conservatives carry a Reform Bill, the Liberals would quickly be re-elected and would pass one themselves, saying that he: '...did not intend for a third time to be a mere stop-gap until it should suit the convenience of the Liberal party to forget their dissensions and bring forward a measure which should oust us from office and replace them there...' ...read more.

B. Smith describes: 'The Queen had a clearer sense than her Ministers of the strength of popular feeling and the necessity to maintain social harmony. Her agency gave the agitations a much greater influence in the counsels of the Tory Government than they would otherwise have possessed.' Therefore it is probably correct to say that personal and party advantages were the motivating forces behind the passing of 1867 Reform Act, although the public pressure should not be totally discounted. It is useful to look at an opinion such as that of the historian P. Smith: 'Derby and Disraeli and their followers, in 1867, did not determine to trust the people, or to put their faith in a Conservative democracy. They did what they felt they had to do, to satisfy the popular agitation, reconcile the upper strata of the working classes to the established political system, and 'dish the Whigs''. In this way we can take the view that although the Reform Act was probably a party political decision, and also a chance for Disraeli to improve his position in the Conservative party, it was also perhaps slightly down to the public pressure. Personal and party advantages were certainly the strongest forces being the passing of the 1867 Reform Act, but not the only ones. ...read more.