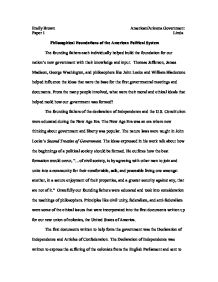 Emily Brown American/Arizona Government Paper 1 Linda Philosophical Foundations of the American Political System The founding fathers each individually helped build the foundation for our nation's new government with their knowledge and input. Thomas Jefferson, James Madison, George Washington, and philosophers like John Locke and William Blackstone helped influence the ideas that were the base for the first governmental meetings and documents. From the many people involved, what were their moral and ethical ideals that helped mold how our government was formed? The founding fathers of the declaration of Independence and the U.S. Constitution were educated during the New Age Era. The New Age Era was an era where new thinking about government and liberty was popular. The nature laws were taught in John Locke's Second Treatise of Government. The ideas expressed in his work talk about how the beginnings of a political society should be formed. He outlines how the best formation would occur, "...of civil society, is by agreeing with other men to join and unite into a community for their comfortable, safe, and peaceable living one amongst another, in a secure enjoyment of their properties, and a greater security against any, that are not of it." ...read more.

One document that provided input was; the Magna Carta. The Magna Carta was the English Parliament's first signed document for the freedom of people from the government's oppression with harsh and increasing taxes. So the congress took into account all the problems they saw in the English government, and tried to provide solutions for them, and preventions for them in our constitution. The Bicameral form of government, provided from the English Bill of Rights, was adopted into our form of government, although there were differences from the English House of Lords and House of Commons that would exist for our government. Many people's ethics and morals had to be intertwined to form a self governing society. George Washington was elected President of the Second Continental Congress and presided over the meetings. Many of the members had different points of views of how the new country should be run. The two main groups were the Federalists and the Anti-Federalists. The leader of the Anti Federalists was Thomas Jefferson. He believed that the government should be based off of the farmers, city workers and the working class. ...read more.

I feel that their job was well served by how they combined many diverse ideas and created one plan for their future. We receive the benefits of a democracy daily, in the way our goods are taxed, how our roads are taken care of, and by having protection groups such as law enforcement officers and firemen. In conclusion, we realize that much effort and time was for the good of our country. We can see that the forefather's exercised how to incorporate beliefs into our government. They made sure that everyone's natural and inalienable rights were protected for future generation's benefit. Their ability to incorporate their experiences with the English Government prevented our government from the same problems. The time and age when these things occurred were important to how the tasks were completed in building a firm foundation to our government. To this day the American Political System is still as solid from the foundation it was built upon. The Constitution has proven to be flexible enough to meet our needs within the last two hundred years. The common thread that bound the founding fathers, still bind us by our freedom and liberty that they provided. ...read more.