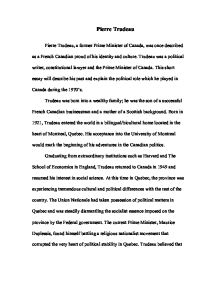 Pierre Trudeau Pierre Trudeau, a former Prime Minister of Canada, was once described as a French Canadian proud of his identity and culture. Trudeau was a political writer, constitutional lawyer and the Prime Minister of Canada. This short essay will describe his past and explain the political role which he played in Canada during the 1970's. Trudeau was born into a wealthy family; he was the son of a successful French Canadian businessman and a mother of a Scottish background. Born in 1921, Trudeau entered the world in a bilingual/bicultural home located in the heart of Montreal, Quebec. His acceptance into the University of Montreal would mark the beginning of his adventures in the Canadian politics. ...read more.

The current Prime Minister, Maurice Duplessis, found himself battling a religious nationalist movement that corrupted the very heart of political stability in Quebec. Trudeau believed that Democracy must come before Ideology. Eventually this statement would attract many politicians and this had allowed him to go on with his ideology onto the people of Quebec. In 1963 when the newly appointed Premier of Quebec, Rene Levesque, warned that Quebec would quit Confederation if a new Canada wasn't formed in 6 years. In 1962 Trudeau actually began defending Federalism to the average worker. In 1965 Pierre Trudeau finally entered politics. He was a defender of civil rights and freedoms, even as a teenager. ...read more.

Trudeau believed that he dedicated his anthology in order for others to understand the problems that French Canadians faced in terms of cultural progress. Trudeau's involvement with the Federal stand may have saved our country Canada. In Trudeau's books, Pierre Elliott Trudeau: Reason Before Passion, and, Trudeau's Shadow: The Life and Legacy of Pierre Elliott Trudeau, covers an enormous amount of historical content. They are fascinating to read and discover how closely he would follow his vision and eventually ascend to the position of Prime Minister. Trudeau got himself involved in a field, politics, which required countless skills. It would lead to his federalist stance which would eventually be justified as a great accomplishment in the 1970's and in Canadian history. Inderpal Kalsi ...read more.