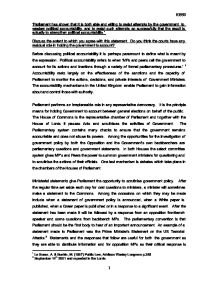 Political accountability -Parliament and the courts

'Parliament has shown that it is both able and willing to resist attempts by the government to weaken political accountability, and to resist such attempts so successfully that the result is actually to strengthen political accountability.' Discuss the extent to which you agree with this statement. Do you think the courts have any residual role in holding the government to account? Before discussing political accountability it is perhaps paramount to define what is meant by the expression. Political accountability refers to when 'MPs and peers call the government to account for its actions and inactions through a variety of formal parliamentary procedures.'1 Accountability rests largely on the effectiveness of the sanctions and the capacity of Parliament to monitor the actions, decisions, and private interests of Government Ministers. The accountability mechanisms in the United Kingdom enable Parliament to gain information about and control those with authority. Parliament performs an irreplaceable role in any representative democracy. It is the principle means for holding Government to account between general elections on behalf of the public. The House of Commons is the representative chamber of Parliament and together with the House of Lords it passes Acts and scrutinises the activities of Government. The Parliamentary system contains many checks to ensure that the government remains accountable and does not abuse its powers. Among the opportunities for the investigation of government policy by both the Opposition and the Government's own backbenchers are parliamentary questions and government statements. In both Houses the select committee system gives MP's and Peers the power to summon government ministers for questioning and to scrutinise the actions of their officials. ...read more.

Again, this shows that the government interferes with procedures that check abuse of power and can ultimately make the procedure ineffective. The Committee published a unanimous report critical of the government's union ban decision and an adjournment debate took place. The contribution of the select committee's investigation and report had a significant effect on the quality of scrutiny by MPs of the government's decision. One of the strengths of the select committee system is that it improves debate as their criticisms and recommendations are addressed. Britain's constitutional arrangements are unusual in respect that the job of holding the government to account is carried out by Parliament. Few other European states bestow their parliamentary assemblies with the power available to Westminster. In most European states parliament has only one task, that task being to enact legislation. In Britain, this is not the case. While prime minister's question time is given attention by the media, Parliament is a far more effective scrutiniser of government than question time would imply. Parliament's best work is undertaken away from the media and away from the floor of the House of Commons. The House of Commons select committees could be seen as one of the best methods Parliament has for holding the government to account. The House of Commons select committees have considerable power. The Standing Orders of the Commons provide that committees may examine any aspect of government 'expenditure, administration or policy.' The committees decide what issues they should investigate and in support of their work they have the power to call for any persons, papers or records and ministers may be compelled to appear before them. ...read more.

Judicial review gives the court a residual role and power to review, and possibly nullify, laws and governmental acts that violate the constitution and higher norms. It is a way to assure that governmental bodies respect the constitution and do not use powers granted to them by the constitution to seize illegitimate power. Judicial review is generally the final word by a governmental institution on a law's validity. The Government may have attempted to weaken political accountability but in reality it has had the effect of strengthening Parliament's position. There has been an increase in the mechanisms that are used in the UK to scrutinise the actions of government and ministers. The government must realise that freedom is not an alternative to accountability. Even the most effective ministers need to be challenged to improve their performance and held to account effectively. If outcomes and targets are not achieved, then there must be mechanisms for intervention. 1 Le Sueur, A. & Sunkin, M. (1997) Public Law, Addison Wesley Longman p.365 2 September 14th 2001 and repeated in the Lords. 3 The Guardian, Wednesday October 23, 2002 4Oliver, D 'The Challenge for Parliament' (2001) Public Law Journal PL Winter Pages 666-674 5 Loveland, I (2003) Constitutional Law, Administrative Law and Human Rights, 3rd edition, Lexis Nexis, Butterworths p.137 6 Bradley, A.W. & Ewing, K.D. (2003) Constitutional and Administrative Law, 13th edition, Pearson Education Ltd, p.695 7 [1983] 2 AC 237 (HL) 8 [1992] 1 All ER 705 (HL) 9 [1984] 3 All ER 976 (HL) 10 [1967] 2 QB 864 11 [1987] 1 All ER 564 (CA) ?? ?? ?? ?? 83990 1 ...read more.