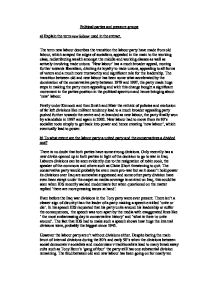 Political parties and pressure groups a) Explain the term new labour used in the extract. The term new labour describes the transition the labour party have made from old labour, which scraped the edges of socialism, appealed in the main to the working class, redistributing wealth amongst the middle and working classes as well as actively involving trade unions. 'New labour' has a much broader appeal, moving further towards liberalism, ditching its loyalty to trade unions, appealing to all forms of voters and a much more trustworthy and significant role for the leadership. The transition between old and new labour has been some what accelerated by the domination of the conservative party between 1979 and 1997, the party made huge steps in making the party more appealing and with this change bought a significant movement in the parties position in the political spectrum and hence bringing about 'new' labour. Firstly under Kinnock and then Smith and Blair the rethink of policies and exclusion of far left divisions like militant tendency lead to a much broader appealing party pushed further towards the centre and re-branded as new labour, the party finally won by a landslide in 1997 and again in 2002. ...read more.

Even before the Iraq war divisions in the Tory party were ever present. There isn't a clearer sign of disunity than the leader of a party making a speech entitled 'unite or die'. In his speech IDS requested that his party unite around his leadership or suffer the consequences, the speech was torn apart by the media with exaggerated lines like ' the most embarrassing day in conservative history' and 'what is there to unite around'. The fact that IDS had to make such a speech shows how huge the internal divisions were, probably the biggest since 1945. However the labour party aren't without divisions either. Despite baring the main brunt of internal divisions during the 80's and early 90's when the divisions between social democrats v socialists and modernises v traditionalists lead to many break away cults such as Tony Benn's 'gang of four' the party still has one substantial division remaining. The feud between old and new labour has been going on for nearly ten years, Arthur Scargills departure from the party showed how much the party had changed, despite these small splits the party has ...read more.

Such comments are further dividing the party, and increasing what looks to be a very bleak situation for the Tories already. But, there is some light at the end of the conservative tunnel. War is a very controversial issue and even though labour have remained fairly disciplined in the circumstances, if the war takes longer that anticipated or there are huge amounts of deaths, it could spell the end of Blair's reign and the start of old divisions being re-opened. Before the war Labours party was extremely disciplined, well lead and had a unity that had been missing for some years, fuelled by the thirst of not wining for 18 years. The conservatives in stark contrast were hugely divided, and rebelled on many issues (recently voting on section 28, 23 Tories voted against IDS) as well as there old divide of pro and anti Europeans mirroring the labour parties divides in the 80's under Michael Foot Despite all this the coming months will severally test labours unity and party discipline as the divisive issue of war comes to the fore. However if things continue as before the war Labour look set to win another election by a comfortable margin ...read more.