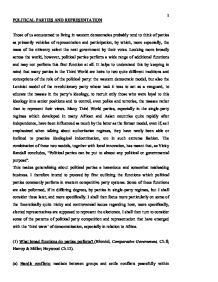 POLITICAL PARTIES AND REPRESENTATION Those of us accustomed to living in western democracies probably tend to think of parties as primarily vehicles of representation and participation, by which, more especially, the mass of the citizenry select the next government by their votes. Looking more broadly across the world, however, political parties perform a wide range of additional functions and may not perform this first function at all. It helps to understand this by keeping in mind that many parties in the Third World are heirs to two quite different traditions and conceptions of the role of the political party: the western democratic model, but also the Leninist model of the revolutionary party whose task it was to act as a vanguard, to educate the masses in the party's ideology, to recruit only those who were loyal to this ideology into senior positions and to control, even police and terrorise, the masses rather than to represent their views. Many Third World parties, especially in the single-party regimes which developed in many African and Asian countries quite rapidly after independence, have been influenced as much by the latter as the former model, even if, as I emphasized when talking about authoritarian regimes, they have rarely been able or inclined to practice ideological indoctrination, etc in such extreme fashion. The combination of these two models, together with local innovation, has meant that, as Vicky Randall concludes, "Political parties can be put to almost any political or governmental purpose". This makes generalizing about political parties a hazardous and somewhat misleading business. I therefore intend to proceed by first outlining the functions which political parties commonly perform in western competitive party systems. Some of these functions are also peformed, if in differing degrees, by parties in single-party regimes, but I shall consider these later, and more specifically. I shall then focus more particularly on some of the theoretically quite tricky and controversial issues regarding how, more specifically, elected representatives are supposed to represent the electorate. ...read more.

Conceivably, in USA, where party structure is weak, one can imagine presidential (and maybe senatorial) candidates running as independents (projecting their views and 'image' over TV, etc). In practice, this hasn't happened, and independent or 'third party' candidates have seldom progressed far, especially in presidential elections. US politicians all have party labels, even if they often behave autonomously. (4) Why do voters support particular parties? (Harrop and Miller, Graham, Blondel, Political Parties, Ch,4). There are, of course, all sorts of reasons, varying considerably from one society to another, but Blondel suggests as an important starting point that individuals may support parties, either for communal reasons ('based on a sense of belonging to a community or way or life') or for associational reasons ('based on common activities and goals'): this is connected with Blondel's proposals about pressure groups (more later). Communal groups are seen as having 'natural' legitimacy, and may transfer part of it to other groups, especially political parties (e.g., a particular church lends its support to a particular political party). Communal groups which most frequently tend to do this may be tribal (ethnic), religious or based on occupation or class. Parties combine communal with associational support, but usually tend towards the associational end of the continuum (i.e., they are more concerned with specific activities and goals than with 'a way of life'). Elaborating Blondel's proposals, one might suggest 3 different modes of identification: (a) Parochial: voters identify closely with their village/clan or other primary communal group and its leader: they vote for that leader or his nominee, often irrespective of party. Notice that in this case, the link between individual and party will probably be weak and indirect: indeed the political system may not have any political parties at the 'associational' end of the continuum - in effect, parties will at best just be labels for communal groups (normally kinship or religious groups). ...read more.

This has often been encouraged by incumbent rulers. (Note Moi's victory in 1992 Kenyan elections despite gaining only 30% of the vote.) (iv) Richard Crook's point re Cote d'Ivoire - it was commonly difficult for newly created opposition parties to present themselves as genuinely 'national' in character. Contrary to the commonly voiced assertion that ruling parties have often represented just one ethnic group, most ruling parties in single-party regimes had sought to practice "ethnic arithmetic", or at least to maintain a multi-ethnic coalition. They often succeeded in labeling newly created opposition parties as being biased towards the ethnic group of their founders. (But a dangerous game, as the case of Cote d'Ivoire has shown.) Nonetheless, despite the fact that the (arguably unrealistic) expectations of many Africanists were disappointed in first round of post-1990 elections, a growing number of ruling parties have been displaced in recent years (e.g. Senegal, Kenya, Ghana). The successor regimes have generally continued to rule, however, in a similarly presidential style, with continuing use of patron-clientelism. This should not really surprise anyone. One always finds this in primarily agrarian societies, and especially in ethnically mixed societies. (Note arguments to this effect re US - clientelism as a means of incorporating new groups into the political system.) It is important to qualify the common notion that African electorates generally vote on the basis of communal solidarity. My own experience of conducting surveys and studying elections in Ghana suggests that, even if ideological differences are of little consequence, parties (and, more especially, their presidential candidates) do project distinctive public images. Voters take these images seriously, together with such issues as which party/presidential candidate is likely to provide the least corrupt ('cleanest') government, political stability, economic improvement, and so on. Voters tend, however, to view these issues and images through ethnically-tinted glasses, according greater credibility to the claims of political leaders from their own area. Note, even so, that in most constituencies in Ghana and many other African states, the distribution of votes between the major competing parties is quite close, refuting any assumption of straightforward communally solidaristic voting. ...read more.