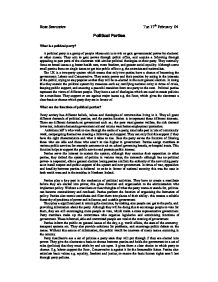 Rose Szarowicz Tue 17th February 04 Political Parties What is a political party? A political party is a group of people whose aim is to win or gain governmental power by electoral or other means. They aim to gain power through public office, and acquire a following through appealing to part parts of the electorate with similar political ideologies to their party. They normally focus on broad issues e.g. better health care, more freedom, and greater social equality. Although some small parties focus on single issues to get into public office e.g. the unionists and nationalists. The UK is a two-party system which means that only two parties have a chance of becoming the government; Labour and Conservative. They retain power and their position by acting in the interests of the public, trying to stay popular so that they will be re-elected in the next general election. ...read more.

They can only find this support if they have the right characteristics and what it takes to rise. Here the party serves the function of filtering those who are able and those who aren't to rise higher in government. Parties assign members to various public services for example someone to sit on school governing boards, or hospital trusts. This function helps to support the public service and protects public interest. Parties serve the interest to sustain the system, although they exercise their opposition to other parties, they defend the system of politics in various ways; the monarch- although has no political power- is respected, after a general election losing parties confirm the authority of the new ruling party as to install respect and public support of the system and new government. In times of war, opposition and hostility between parties is deferred to unite in favour of national security; this was the case in both world wars and in the troubles in Northern Ireland. ...read more.

Party members make up the committees who organise legislative and scrutinising functions of government. These informed, able and committed people are vital to the running of government. Parties inform the public on general issues of the day, e.g. world affairs, the state of the economy, transport systems etc. They also provide solutions for problems, and encourage public debate on the issues. Without this source of information, the public would be unaware of many issues occurring in the country. Party manifesto's are a set of policies a party state they will put through if they are elected into power. They give the electorate a basis to choose between parties and holds the government to a set of rules (policies) that they must abide by and act upon. It gives them a clear choice to which party to choose. E.g. labour support the Euro , Conservative is against it for the foreseeable future. Parties also articulate basic values e.g. equality, freedom and justice, to ensure the basic human rights aren't lsot through party policies. ...read more.