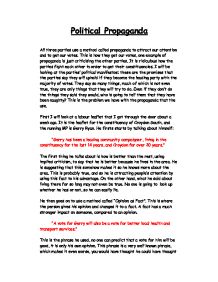 Political Propaganda All three parties use a method called propaganda to attract our attention and to get our votes. This is how they get our votes, one example of propaganda is just criticising the other parties. It is ridiculous how the parties fight each other in order to get their constituencies. I will be looking at the parties' political manifestos; these are the promises that the parties say they will uphold if they become the leading party with the majority of votes. They say so many things, much of which is not even true, they are only things that they will try to do. Even if they don't do the things they said they would, who is going to tell them that they have been naughty? This is the problem we have with the propaganda that the use. First I will look at a labour leaflet that I got through the door about a week ago. It is the leaflet for the constituency of Croydon South, and the running MP is Gerry Ryan. He firsts starts by talking about himself: "Gerry has been a leading community campaigner, living in the constituency for the last 14 years, and Croydon for over 20 years." ...read more.

All the other quotes were of similar intentions, to get you to vote for him. It makes it all seem unreal, the way that all of his quotes are saying how wonderful he is, if he wanted it to look real he would have had to put in a quote about him being not perfect, but then that wouldn't win him the votes would it. On the back of the leaflet, he goes on to telling us what he is going to do. He talks about jobs, public transport, opportunities for young people, crime and healthcare. These are all the most talked about issues at the moment making it a good idea to talk about them. The bit that annoys me about all his aims is that they are aims, and not promises. This is what I mean: "I will push for the train and bus companies to give Croydon a better service." "I'll work hard to bring even more investment to South Croydon." Never at any point does he actually say, "I will improve public transport", he only ever says that he will "push" to make it better. ...read more.

We choose our own job, car, house, partner, and even how we get to work or school. No one controls these things apart from us. So saying that we will become free is just stupid. Here William Hague has used an unanswerable proposal. You can't say anything back to this statement, as it is not a question. Again he look sat taxes, public services, quality of life etc. It is like a war between the parties fighting over the same territory which in this case political issues such as taxes. It seems like a waste of time. No one can judge each party separately, as they all do the same thing, criticise each other, and fight over certain issues that interest the voters. All the parties are as bad as each other, using propaganda to attract more votes. Why can't they be honest with us, tell us what they will really do, interest us in what really matters. If a new party went up for election and said exactly what they were going to do, were totally honest and didn't criticise the other parties I any way, I would hope they would do well. But in our world, don't play like everyone else and you'll get nowhere. ...read more.