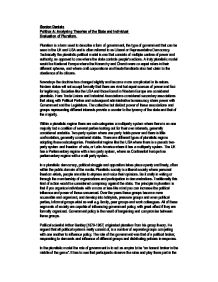 Politics A: Analysing Theories of the State and Individual - Evaluation of Pluralism.

Gordon Daniels Politics A: Analysing Theories of the State and Individual Evaluation of Pluralism. Pluralism is a term used to describe a form of government, the type of government that can be seen in the UK and USA and is often referred to as Liberal or Representative Democracy. Technically the pluralistic political model is one that consists of multiple centres of power and authority, as opposed to one where the state controls people's actions. A truly pluralistic model would be Medieval Europe where the Monarchy and Church were co-equal rulers in their different spheres, and where craft corporations and feudal landlords also had claim to the obedience of its citizens. Nowadays the doctrine has changed slightly and become more complicated in its nature. Modern states will not accept formally that there are rival but equal sources of power and foci for legitimacy. Societies like the USA and those found in Western Europe are considered pluralistic. Here Trade Unions and Industrial Associations considered secondary associations that along with Political Parties and subsequent administrative bureaucracy share power with Government and the Legislature. The collective but distinct power of these associations and groups representing different interests provide a counter to the tyranny of the state and that of the majority. ...read more.

Alexis de Tocqueville [1805-1859] was a French political writer saw that mass participation beyond voting rights was impossible, hence the necessity of organized groups such as the lobby groups and pressure groups and the ability to join political parties. This mass involvement is an integral element, these secondary associations and parties link individuals and groups to the formal power structures and the diversity of groups ensures all individuals have a place to express their views. Modern pluralists recognise that not every elector can or wants to be a member of a political party or secondary association and would rather adopt a more passive role. Pluralist and political theorist Robert Dahl [1915-] argued that mass participation was not required and only legitimised the authority of the decision makers, he did not see his theory of polyarchy a government for the people by the people, instead he saw no government by the people but government approved by the people. Individual participation and the formation of political parties, interest groups and other secondary associations are vital in a pluralistic democracy. The parties have the people power to educate and spread a message through manifestos, broadcasts and canvassing this informs public opinion and presents a choice. It is the role of these parties to shape, educate and clarify public opinion and choice. ...read more.

Robert Dahl saw that pluralism responded to a high degree of industrialization. Therefore it could be considered impossible to bring a pluralistic democracy to developing nations, where people are undernourished, uneducated and illiterate and as a result unable to participate. This idea that people participate and have the power to influence is key to modern pluralism, ensuring this is not a problem only in the developing world. Do we all really have the power to participate are the unemployed, poor, uneducated and minority ethnic groups represented, and if they have interest groups do those groups have the recognition and power to influence policy. Often are representatives are unrepresentative, with the electoral system in the UK not all voters are represented by their member of parliament, only those voters who voted for the winner are. Marxists claim that the fundamental structures do not change and so power is not redistributed, the means of production and financial power lies with the elite meaning that certain sections are ignored and left to feel like they have no power or influence. For many Pluralism is the end result of the ideology of liberalism what Karl Marx called the dominant ideology. A pluralistic democracy is one in which the power of the state is limited; not everything is politicized and fundamental freedoms such as free speech, a free media, open and fair elections, an independent judiciary, religious toleration and genuine trade unions are guaranteed. ...read more.