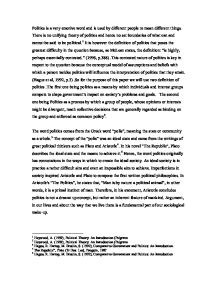 Politics is a very emotive word and is used by different people to mean different things. There is no unifying theory of politics and hence no set boundaries of what can and cannot be said to be political.1 It is however the definition of politics that poses the greatest difficulty in the question because, as McLean states, the definition: "is highly, perhaps essentially contested." (1996, p.388) .This contested nature of politics is key in respect to the question because the conceptual model of assumptions and beliefs with which a person tackles politics will influence the interpretation of politics that they attain. (Hague et al, 1992, p.3) .So for the purpose of this paper we will use two definition of politics .The first one being politics as a means by which individuals and interest groups compete to shape government's impact on society's problems and goals. The second one being Politics as a process by which a group of people, whose opinions or interests might be divergent, reach collective decisions that are generally regarded as binding on the group and enforced as common policy2. The word politics comes from the Greek word "polis", meaning the state or community as a whole.3 The concept of the "polis" was an ideal state and came from the writings of great political thinkers such as Plato and Aristotle4. In his novel "The Republic", Plato describes the ideal state and the means to achieve it.5 Hence, the word politics originally has connotations in the ways in which to create the ideal society. ...read more.

would be at the forefront of a slightly lacking in knowledge in terms of business government .Gordon Brown also has advantage because of the fact that he has business experience. Gordon Brown experiences as chancellor give him a good chance of winning the elections. With Gordon being more business and financially orientated , this can help provide more insight into the kind of policies he would follow with his government .Gordon Brown as a government agent in the overall political organization of the country has passed a law in which to abandon the new corporate financial reporting rules regarding reinforcing that he is more moderately business enlightened and he is willing to establish a business friendly economy .The current central political institutions in UK , which is the labour party , has overtly shown a form of politics as a form of government by being authoritative in the sense of being able to decide for the country as a whole .The labour party has passed an a law and has issued a report to give information on education within the country as a whole . Both Gordon Brown and David cameron differs in their policy .This article provide evident that Brown favours capitalist economy while Cameroon calls for a return to old welfare , socialist democratic labourism12 .As stated in the article Gordon Brown like Blair is obsessed with the American system of economy (Capitalist). ...read more.