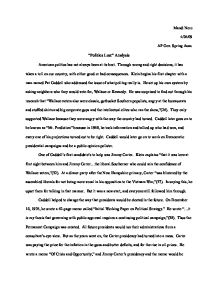 Mandi Nero 4/26/09 AP Gov. Spring Assn. "Politics Lost" Analysis American politics has not always been at its best. Through wrong and right decisions, it has taken a toll on our country, with either good or bad consequences. Klein begins his first chapter with a man named Pat Caddell who addressed the issue of what polling really is. He set up his own system by asking neighbors who they would vote for, Wallace or Kennedy. He was surprised to find out through his research that "Wallace voters also were classic, gutbucket Southern populists, angry at the bureaucrats and stuffed shirts and big corporate guys and the intellectual elites who ran the show,"(26). They only supported Wallace because they were angry with the way the country had turned. Caddell later goes on to be known as "Mr. ...read more.

He wrote "...it is my thesis that governing with public approval requires a continuing political campaign,"(38). Thus the Permanent Campaign was created. All future presidents would run their administrations from a consultant's-eye view. But as the years went on, the Carter presidency had turned into a mess. Carter was paying the price for the inflation in the guns-and-butter deficits, and for the rise in oil prices. He wrote a memo "Of Crisis and Opportunity," and Jimmy Carter's presidency and the memo would be remembered in the future by one word, malaise, a vague feeling depression or illness. Had he run the country into a rut? In the end, his cabinet ended up resigning and many went to work for Kennedy. The first time Ronald Reagan ran for president, he had lost to Gerald Ford. Being an ex-actor, not many people took him seriously, and also John Sears had been put on Reagan's team as a political consultant. ...read more.

Reagan's style of leadership would later contribute to the belittling of American politics. Government was now the enemy of freedom. Reagan had a carefully programmed political style. Later on in his run for a second term, his age issue was brought up. In his second debate against Walter Mondale, he said "...I will not make age an issue of this campaign. I am not going to exploit, for political purposes, my opponent's youth and inexperience,"(86). And with that, Reagan's second term was assured. Not only presidencies were the best. None of them have actually even been good. There's always a mistake made and looked down upon by Americans. While Carter had messed up his presidency, Reagan turned out to be a fine leader, but he too made mistakes. Not every president is perfect. They only have slip ups because they do what they think is best for the people but in the end it turns out not to be the right choice. ...read more.