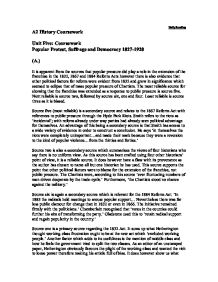 Holly Reading A2 History Coursework Unit Five: Coursework Popular Protest, Suffrage and Democracy 1827-1928 (A.) It is apparent from the sources that popular pressure did play a role in the extension of the franchise in the 1832, 1867 and 1884 Reform Acts however there is also evidence that other political factors for reform were evident from 1832 and grew in significance which seemed to eclipse that of mass popular pressure of Chartism. The most reliable source for showing that the franchise was extended as a response to public pressure is source five. Next reliable is source two, followed by source six, one and four. Least reliable is source three as it is biased. Source five (most reliable) is a secondary source and relates to the 1867 Reform Act with references to public pressure through the Hyde Park Riots. Smith refers to the riots as 'incidental'; with reform already under way parties had already seen political advantage for themselves. ...read more.

Source six is again a secondary source which is relevant for the 1884 Reform Act. 'In 1883 the radicals held meetings to arouse popular support... Nevertheless there was far less public clamour for change than in 1832 or even in 1866. The initiative remained firmly with the politicians.' Chamberlain recognised that 'votes in the counties could further his aim of transforming the party.' Gladstone used this to 'retain radical support and regain popularity in the country.' Source one is a primary source regarding the 1832 Act. It sums up what Hetherington thought working-class frustration ought to be at the new act which 'excluded working people.' Another factor which adds to its usefulness is the mention of middle class and how he feels the government tried to split the two classes. As an editor of an unstamped paper, Hetherington obviously favours the plight of the working class and wanted the rich to loose power therefore making his article full of bias. ...read more.

He is rather cynical and mocks Disraeli saying he 'has adopted a course which is definitely credible to his dexterity as a tactician.' He uses jokes throughout his speech to mock Disraeli further using a 'shy horse' as a metaphor for his party. This source also shows no evidence of public pressure at all making it have limited usefulness. Lowe is making this speech to influence others into thinking the way he does and go against Disraeli making it the most unreliable source. In conclusion, the most reliable sources turned out to be secondary ones rather than the primary ones from the time which are hard to trust due to social factors which influenced people at the time. Some sources are good on content (e.g. source one) but lack the fundamental factor of reliable provenance which makes them biased. Overall, the sources tend to support the opinion that other political factors like party political advantage were to blame for the extension of the franchise rather than from public pressure. Word Court: 822 ...read more.