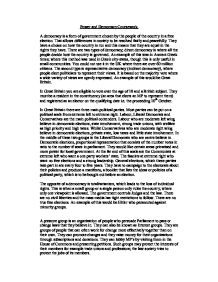 Power and Democracy in the UK.

Power and Democracy Coursework. Amareen10B A democracy is a form of government chosen by the people of the country in a free election. That allows differences in society to be resolved fairly and peacefully. They have a choice on how the country is run and this means that they are equal in the rights they have. There are two types of democracy; direct democracy is where all the people decide how the country is governed. An example of this was in Ancient Greek times; where this method was used in Greek city-states, though this is only useful in small communities. You could not use it in the UK where there are over 60 million citizens. The second type is representative democracy (indirect democracy), where people elect politicians to represent their views. It is based on the majority vote where a wide variety of views are openly expressed. An example of this would be Great Britain. In Great Britain you are eligible to vote over the age of 18 and a British subject. They must be a resident in the constituency (an area that elects an MP to represent them) and registered as an elector on the qualifying date i.e. the proceeding 10th October. In Great Britain there are three main political parties. Most parties can be put on a political scale from extreme left to extreme right. Labour, Liberal Democrats and Conservatives are the main political contenders. Labour who are moderate left wing believe in democratic elections, state involvement, strong trade unions, with welfare as high priority and high taxes. Whilst Conservatives who are moderate right wing believe in democratic elections, private state, low taxes and little state involvement. In the middle of these two groups is the Liberal Democrats who are centre believe in Democratic elections, proportional representation that consists of the number votes in ratio to the number if seats in parliament. ...read more.

They can prove very successful as many people have access to the Internet, as it is a great source of knowledge and information. The website address is 'www.joinamnestynow.org.uk', is displayed in bold on the front of the leaflet. The site is an exact copy of the format of the leaflet; accept it uses java script animation to give hard hitting facts and links to all it's other sites whilst giving information on how to join and what 'you' can do to help and used as another advertising resource to promote the organisation. Their main focus is to free all prisoners of conscience who are detained for their beliefs or ethnic origin, sex, colour, language etc; that have not used or advocated violence. Amnesty would like to ensure fair and prompt trials for political prisoners; and abolish the death penalty, torture and other cruel inhuman or degrading treatment of the prisoners, as well as ending extra judicial executions and disappearances. The leaflet is folded; it has six sections including the front and back pages. The whole of the leaflet has been designed with three colours; white, black and a dull green. Even though these colours can be limiting as there are no changes in tone and also they aren't very eye-catching. It still draws your attention as the graphic design has been carefully structured with different words and fonts. On the front of the leaflet there is a slogan 'if you can't imagine what it's like to be tortures let's bring it closer to home.' This caption can be described as a double entrendre as it is has a hidden meaning. The first impression that it gives you is that the leaflet can inform you about torture that has happened around the world and what the organisation is about. The second meaning is that the torture is already happening at 'home', so you don't have to bring it home; it happens all the time and you can be completely oblivious to it. ...read more.

On the back of the leaflet there is some general information about Amnesty International; including facts on cases, the organisation and what they campaign for. Again they choose to enlarge words like 'you', 'stop torture', 'amnesty' and 'campaigns', to emphasise the most important factors. Throughout the leaflet the tactic of what 'you' can do to help is used to try and involve the reader. I think that it is a good thing that they use real case studies in their leaflets. There is a lot of information, so even if you have never heard of the group you will be fully informed. It is a good that they do not use pictures of the cases that they have helped as that would be unnecessary as the description of the cases is enough to show you the horror. Also the use of the iron graphic at the start of the leaflet keeps the reader interested so in turn they read on, this is one way in which a pressure group can use propaganda to gain support, by drawing the attention of the reader. The back of the leaflet has a quick and easy summary of campaign issues of Amnesty International, this can be useful for those who may not have enough time to read the whole leaflet but want to get involved. However the format of the leaflet has been kept the same style with colour, font and text. This can make the leaflet seem flat, bland and a bit tedious by the time you get to the end of the leaflet. Also the donation form is very big, even though it gives you various methods of payments, it does look a bit desperate as if they have focussed the attention more on the donations after giving you examples of case studies. Moreover the leaflet is very formal so it would seem that it would be suitable to an older age group. It also it is written so the language is more formal, this suggests that it would be read by an educated person. By Amareen Bhambra.10B. Websites. www.joinamnestynow.org www.amnesty.org www.panda.org www.sas.org.uk ...read more.