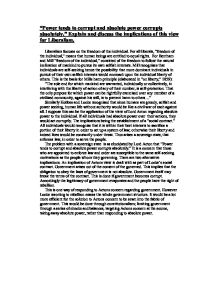 I suppose this can be the application of the view of Lord Acton regarding absolute power to the individual. If all individuals had absolute power over their actions, they would act corruptly. The implications being the establishment of a "social contract." All individuals would recognise that it is within their best interests to sacrifice a portion of their liberty in order to set up a system of law; otherwise their liberty and indeed lives would be constantly under threat. Thus arises a sovereign state, that enforces law, in order to serve the people. ...read more.

Government arises out of the consent of the governed. This implies that the obligation to obey the laws of government is not absolute. Government itself may break the terms of the contract. This is done if government becomes corrupt. Accordingly the legitimacy of government evaporates and the people have the right of rebellion. This is one way of responding to Actons concern regarding government. However Locke resorting to rebellion erases the whole government structure. It would be a lot more efficient for the solution to Actons concern to be sewn into the fabric of government. This would be done through constitutionalism; limiting government through a series of checks and balances, targeting Actons concern at the source, taking away absolute power, rather than responding to absolute power. ...read more.