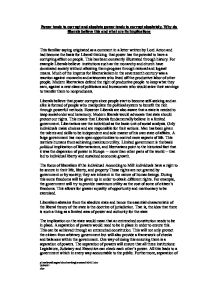 Power tends to corrupt and absolute power tends to corrupt absolutely. Why do liberals believe this and what are its implications This familiar saying originated as a comment in a letter written by Lord Acton and had become the basis for Liberal thinking. that power has the potenial to have a corrupting affect on people. This has been constantly illustrated through history. For example Liberals believe institutions such as the monarchy and church have dominated society without allowing them progress through rational and logical means. Much of the impetus for libertarianism in the seventeenth century was a reaction against monarchs and aristocrats who lived off the productive labor of other people. Modern libertarians defend the right of productive people to keep what they earn, against a new class of politicians and bureaucrats who would seize their earnings to transfer them to nonproducers. Liberals believe that power corrupts since people start to become self-seeking and an elite is formed of people who manipulate the political system to benefit the rich through powerful methods. However Liberals are also aware that a state is needed to keep social order and heramony. ...read more.

This allows for greater equality of opportunity and meritocracy to be exercised. Liberalism abstains from the absolute state and hence the essential characteristic of the liberal theory of the state is the doctrine of jurisdiction. That is, the idea that there is such a thing as a limited area of power and authority for the state The implication on the state would mean that an entrenched constitution needs to be in place. A separation of powers would need to be in place in order to ensure this. This can be achieved through an entrenched constitution. This will not only protect the citizen from arbitrary government but will also provide a framework of checks and balances within the government. One way of doing this ensuring there is a separation of powers. The separation of powers will ensure that all three institutions: Legislature, Judiciary and Executive can check each other's power. All this leads to a government which in every way accountable to the public. Furthermore, separation of powers ensures that the judiciary retains its neutrality and independence from any external political influence. ...read more.

All this would contribute to a more a pluralistic society. The possibility of single-party 'elective dictatorship' is greatly diminished. Tolerance is an important element of classical liberalism since society consists of individuals with varying values and principles and as far as possible these differences should be respected; minority groups need the protection of the law in some cases to prevent the 'tyranny of the majority'. To protect rights, individuals form governments. But government is a dangerous institution. Libertarians have a great antipathy to concentrated power, for as Lord Acton said, "Power tends to corrupt and absolute power corrupts absolutely." Thus they want to divide and limit power, and that means especially to limit government The implication of this lies with consituional devices such as devolution. It is by minimising the concentration of power in any one centre and by setting up many alternative, counterbalancing centers of power that limited government can be retained. Devolution essentially involves the setting up of an elected regional assembly whose powers are carefully and clearly defined by national government. However devolution would not have full powers to raise tax or control over foreign policy and thus as liberals would agree have less chance of becoming corrupt since they have only limited powers. n:\mywork\politics- elders\power tends to corrupt.doc 30/04/07 97aftab ...read more.