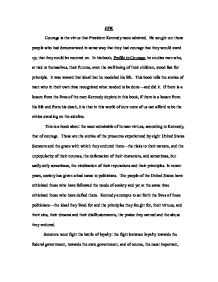 JFK Courage is the virtue that President Kennedy most admired. He sought out those people who had demonstrated in some way that they had courage that they would stand up, that they could be counted on. In his book, Profile in Courage, he studies men who, at risk to themselves, their futures, even the well being of their children, stood fast for principle. It was toward that ideal that he modeled his life. This book tells the stories of men who in their own time recognized what needed to be done-and did it. If there is a lesson from the lives of the men Kennedy depicts in this book, if there is a lesson from his life and from his death, it is that in this world of ours none of us can afford to be the critics standing on the sideline. This is a book about the most admirable of human virtues, according to Kennedy, that of courage. These are the stories of the pressures experienced by eight United States Senators and the grace with which they endured them-the risks to their careers, and the unpopularity of their courses, the defamation of their characters, and sometimes, but sadly only sometimes, the vindication of their reputations and their principles. ...read more.

Later, he attended a banquet of Jeffersonians in celebration of the Louisiana Purchase. He became increasingly contemptuous of the Federalist Party. He could not yield his devotion to the national interest for the narrowly partisan, parochial, and pro-British outlook, which dominated New England's first political party. Federalists left him bothered constantly by a sense of inadequacy, frustrations, and in the end failure because of his desertion of their party. After 3 months in office, he had irritated his seniors and precipitated a three-hour debate by objecting to a routine resolution calling upon Senators to wear crepe one month in honor of three recently deceases patriots. He astounded his colleagues by seeking to disqualify from an impeachment hearing any Senator who had previously voted on the impeachment resolution as a Member of the House. He constantly placed himself in opposition to the other forty-nine senators. His isolation from either party, or the antagonisms which he aroused, practically nullified the impact of his own independent and scholarly propositions. But the official split between party and senator occurred in 1806 when Adams introduced and pushed to passage a series of resolutions condemning British aggressions upon American ships, and requesting the President to demand restoration and indemnification of the confiscated vessels. ...read more.

He shows the clashes each Senator faces due to their opinions, their speeches-all in all, they way they played the character of Senator. Adams faced clash in the sense that the Federalists constantly harassed him. They left him feeling inadequate. The Federalists hated him, yet he was also suspected by the Republicans, and left with nowhere to find solace, but his father. But further than simply telling the reader that citizens should respect politicians and allow some room for inevitable minute mistakes, Kennedy also tells us that Senators may not always be right-that they may not always do what is best for the nation. He shows the reader through these stories, that to be courageous requires no exceptional qualifications, no magic formula, and no special combination of time, place and circumstance. Nor is courage a constant idea, but rather a transient one-that changes with time, with history, with current events. Courage is an opportunity that sooner or later is presented to us all and thus every human has an opportunity to pass the test of courage. Politics is simply one area where courage is tested. Kennedy urges the reader in saying, "The stories of past courage can define that ingredient-they can teach, they can offer hope, they can provide inspiration. But they cannot supply courage itself. For this each man must look into his own soul." ...read more.