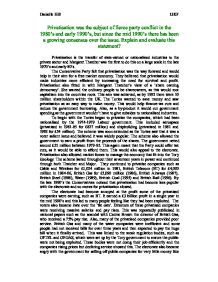 Privatisation was the subject of fierce party conflict in the 1980's and early 1990's, but since the mid 1990's there has been a growing consensus over the issue. Explain and evaluate this statement

Privatisation was the subject of fierce party conflict in the 1980's and early 1990's, but since the mid 1990's there has been a growing consensus over the issue. Explain and evaluate this statement? Privatisation is the transfer of state-owned or nationalised industries to the private sector and Margaret Thatcher was the first to do this on a large scale in the late 1970's and early 80's. The Conservative Party felt that privatisation was the way forward and would help in their aim for a free market economy. They believed that privatisation would make industries more efficient by increasing the need for survival and profit. Privatisation also fitted in with Margaret Thatcher's view of a 'share owning democracy'. She wanted the ordinary people to be shareowners, as this would root capitalism into the countries roots. This aim was achieved, as by 1992 there were 10 million shareholders within the UK. The Tories wanted to save money and saw privatisation as an easy way to make money. This would help finance tax cuts and reduce the government borrowing. Also, as a by-product it would cut government spending as the government wouldn't have to give subsides to nationalised industries. To begin with the Tories began to privatise the companies, which had been nationalised by the 1974-1979 Labour government. This included aerospace (privatised in 1981-85 for �827 million) ...read more.

The electorate also became angry with the government for selling off public companies for very little money like Rail Track as this was sold for only �1.95 billion. All the privatisation led to huge unemployment figures as the privatised companies sought profit. BT alone lost 108,000 jobs between 1990 and 1991. The Tories believed in privatisation and thought it would increase efficiency, which it proved with the Jaguar Company as it was now making a �10 million profit and not a �121 million loss as it had previously but saw that there were inefficiencies with the system. They still support privatisation and are currently tackling new areas that have previously been taboo areas. These include the new 'schools passport' and the idea of Private-Public health care a new Private Public Partnership (PPP). During this period Labour was suffering from numerous embarrassing electoral defeats due partly to their position on privatisation. Labour was underpinned by socialism and this was characterised by common ownership seen in clause 4. This suggested harnessing material resources for the common good. Labour was hostile to privatisation as it believed that the Tories had no right to sell off what was collectively owned by the people. Former Conservative Prime Minister Lord Macmillan likened it to selling off the family silver. They said you could not sell what the society owned and that the people should not be exploited by ruthless businessmen. ...read more.

Also, even if Labour did want to renationalise the cost of doing so would be colossal and electorally unpopular. During the 1980's and the early 1990's Labour did not agree with the Conservative enthusiasm for privatisation. They believed in their socialist views and thought that privatisation was selling off what people already owned. The Conservatives on the other hand believed privatisation was a brilliant idea, which would improve the efficiency of the companies so they could provide a better service for the public. There are elements of truth in both ideas but the electorate believe in privatisation, as it tends to produce efficient companies such as BT and Jaguar. The problem with some of these companies is that they don't work as a private company as directors are more concerned with making profits and so the quality of the service decreases. This can be seen with Rail Track which has since come out of administration and a new not-for-profit company, Network Rail, has had to take over the running of the railways. Now since New Labour has evolved there is a consensus between them and the Conservatives over privatisation. Both believed in the free market and have moved away from a Keynesian approach to the economy. Labour are now privatising companies and industries that were left by the conservatives such as hospitals and the London Underground but are doing so using PPP's and Private Finance Initiatives (PFI's) rather than the traditional Tory way of public procurement deals. Danielle Hill 13KF ...read more.