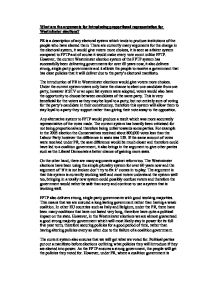 What are the arguments for introducing proportional representation for Westminster elections? PR is a description of any electoral system which tends to produce institutions of the people who have elected them. There are currently many arguments for the change in the electoral system, it would give voters more choices, it is seen as a fairer system compared to FPTP and of course it would make every vote count unlike FPTP. However, the current Westminster election system of the FPTP system has successfully been delivering governments for over 60 years now, it also delivers strong, single party governments and it allows the people to receive a government that has clear policies that it will deliver due to the party's electoral manifesto. The introduction of PR in Westminster elections would give voters more choices. ...read more.

If the same amount of votes were received under PR, the seat difference would be much closer and therefore could have led to a coalition government, it also brings in the argument to give other parties such as the Liberal Democrats a better chance of gaining more seats. On the other hand, there are many arguments against reform too. The Westminster elections have been using the simple plurality system for over 60 years now and the argument of 'if it is not broken don't try to fix it' comes in to play. The argument is that this system is currently working well and most voters understand the system well too, bringing in a totally new system could possibly confuse voters and therefore the government would rather be safe than sorry and continue to use a system that is working well. ...read more.

As the FPTP ensures a strong government, the people will get the policies they voted for. However, under PR, where a coalition government is likely, conflict of ideas will also be likely making it harder to pass legislature, therefore it will probably mark the end of the manifesto system and therefore it will make voters unsure of what they are exactly voting for. There are good arguments for and against of an electoral reform and although the PR system offers the chance to make every vote count, the FPTP system has been working very well for such a long period now that it would be undesirable to change it now. The FPTP system ensures we get a government, and that is the most important part of an electoral system and it is currently ensuring that we do get a government, so it is fit for purpose and therefore it would be better if this system was not abandoned. ...read more.