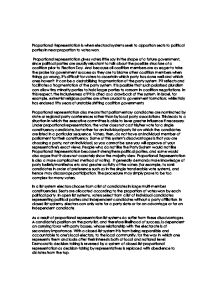 Proportional Representation is when electoral systems seek to apportion seats to political parties in near proportion to votes won.

Proportional Representation is when electoral systems seek to apportion seats to political parties in near proportion to votes won. Proportional representation gives voters little say in the shape of a future government, since political parties are usually reluctant to talk about the possible structure of a coalition prior to Election Day. And because all coalition members are as eager to take the praise for government success as they are to blame other coalition members when things go wrong, it's difficult for voters to ascertain which party has done well and which ones haven't. It can be a destabilising fragmentation of the party system. PR reflects and facilitates a fragmentation of the party system. It is possible that such polarized pluralism can allow tiny minority parties to hold larger parties to ransom in coalition negotiations. In this respect, the inclusiveness of PR is cited as a drawback of the system. ...read more.

It generally demands more knowledge of party beliefs/manifestos etc and greater activity of the voters (for example, to rank candidates in order of preference such as in the single transferable vote system), and hence may discourage participation. The procedure may simply prove to be too complex for many voters. In a list system electors choose from a list of candidates in large multi-member constituencies. Seats are allocated according to the proportion of votes won by each political party. In open list systems, voters select from a list of individual candidates representing political parties and independent candidates without a party affiliation. In closed list systems, electors can only vote for a party slate or for an advantage or for an independent candidate. As a result of proportional representation list systems do suffer from these disadvantages. A candidate's position on the party list, and therefore likelihood of success, is dependent on currying favor with party bosses, whose relationship with the electorate is of secondary importance. ...read more.

In the regional or national list systems, party leaders may draw up lists of only like-minded candidates which may disadvantage minority groups within a party. Although there is a larger than average number of women in the Scottish Parliament, there are few representatives from other groups such as ethnic minorities or the disabled. This is not desirable for an effective democracy. However there are some advantages of the list systems. The strength of such of the system guarantees a high degree of proportionality. If a party receives 32% of the vote, they will get 32% of the seats in parliament. Every vote has the same value. Also the system is very simple for voters, who have only to make one choice for a party out of a small section. Proportional representation voting systems facilitate the election of legislatures that accurately reflect the diversity of opinion of the electorate and tend to produce policy that adheres more closely to the "will of the majority" because more people have representation. Nevertheless at the same time, governance can be more complicated and geographic representation less certain than with winner-take-all elections. ...read more.