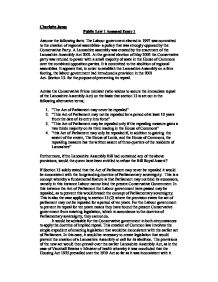 Charlotte Jones Public Law 1 Assessed Essay 1 Assume the following facts. The Labour government elected in 1997 was committed to the creation of regional assemblies- a policy that was strongly opposed by the Conservative Party. A Lancashire assembly was created by the enactment of the Lancashire Assembly Act 2001. At the general election of May 2005 the Conservative party was retuned to power with a small majority of seats in the House of Commons over the combined opposition parties. It is committed to the abolition of regional assemblies. It appears that, in order to establish the Lancashire Assembly on a firm footing, the labour government had introduced a provision in the 2001 Act- Section 13- for the purpose of preventing its repeal. Advise the Conservative Prime minister (who wishes to secure the immediate repeal of the Lancashire Assembly Act) on the basis that section 13 is set out in the following alternative terms; 1. "The Act of Parliament may never be repealed" 2. "This Act of Parliament may not be repealed for a period of at least 10 years from the date of its entry into force" 3. ...read more.

Illustrating this point is the special procedure created to repeal the act that made Northern Ireland part of the United Kingdom. In this instance the Northern Ireland Act 1998, section 1 requires the holding of a referendum before any legislation to remove Northern Ireland from the United Kingdom can be passed, and therefore for any government to attempt to introduce an act that would repeal the Northern Ireland Act they would certainly be required to hold a referendum with an outcome in the favour of Ireland being removed required. In this case, the present Parliament will have to gain a two-thirds majority on its third reading in the House of Commons for the repeal to be effective. Given such circumstances, it is necessary to state that the present Parliament is unlikely to get two-thirds majority since the Conservative Party returned to power with only a small majority of seats in the House of Commons. This too is the case for the provision stating the Act cannot be repealed without gaining the assent of the crown, both houses of Parliament, and the written assent of three quartes of the residents of Lancashire. ...read more.

While the power to withhold Royal Assent was once exercised often, as it could be in this case, it is almost never exercised under modern constitutional conventions. This notion of constitutional conduct includes a strong element of what is customairly expected. In this case it is not expected that the Queen will act against the advice of the Prime minister, as to do this would mean she was acting against the will of the public who voted the government into power. And such an act against the will of the people would cause contreversy on the mere existance of the crown. Conventions embrace the idea that the Sovereign usually acts on the advice of his or her ministers. Since these ministers most often maintain the support of Parliament and are the ones who obtain the passage of bills, it is highly improbable that they would advise the Sovereign to withhold Assent. Hence, in modern practice, the Royal Assent is usually granted; a refusal to do so would only be appropriate in an emergency requiring the use of the monarch's reserve powers. 1 According to the Alternative view Acts of Parliament can be challenged by the courts and some rendered invalid. As could be the case in this instance. ?? ?? ?? ?? ...read more.