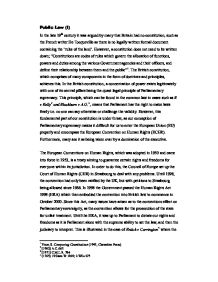 Public Law (I) In the late 19th century it was argued by many that Britain had no constitution, such as the French writer De Tocqueville as there is no legally written formal document containing the 'rules of the land'. However, a constitution does not need to be written down; "Constitutions are codes of rules which govern the allocation of functions, powers and duties among the various Government agencies and their officers, and define their relationship between them and the public"1. The British constitution, which comprises of many components in the form of doctrines and principles, achieves this. In the British constitution, a concentration of power exists legitimately with one of its central pillars being the quasi-legal principle of Parliamentary supremacy. This principle, which can be found in the common law in cases such as R v Kelly2 and Blackburn v A.G.3, means that Parliament has the right to make laws freely i.e. no one can say otherwise or challenge the validity. However, this fundamental part of our constitution is under threat, as our conception of Parliamentary supremacy makes it difficult for us to enter the European Union (EU) properly and encompass the European Convention on Human Rights (ECHR). Furthermore, many see it as being taken over by a domination of the executive. ...read more.

Lord Denning initially took the view that once a statute has been passed, it is not for the courts to argue11, thus following the theory of Parliamentary Supremacy. However, as time passed the courts changed and began to implement EU law as supreme12 but leaving the question as to what would happen if Parliament wanted to over rule a piece of EU legislation unanswered. Currently, the authority on this problem comes in a series of cases known as the Factortame cases in which a conflict with the Merchant Shipping Act 1988 arose. On this case, the European Court of Justice (ECJ) ruled that while a domestic statute was in conflict with EU law, then the statute should be suspended and EU law prevail. This was upheld by the House of Lords on return and has been seen by many a dramatic constitutional change, removing the continued supremacy of Parliament. Adding to the undermining of Parliament was the courts decision that damages should be awarded to the parties who lost money due to loss of income because of the offending statute. All these points further undermine the theory of supremacy as it appears that the Government of 1972 have successfully bound any future Governments by incorporating EU law into Britain. ...read more.