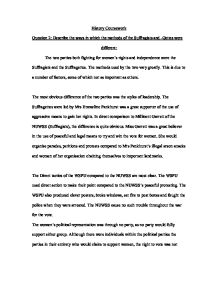 Question 2: Describe the ways in which the methods of the Suffragists and -Gettes were

History Coursework Question 2: Describe the ways in which the methods of the Suffragists and -Gettes were different: The two parties both fighting for women's rights and independence were the Suffragists and the Suffragettes. The methods used by the two vary greatly. This is due to a number of factors, some of which not as important as others. The most obvious difference of the two parties was the styles of leadership. The Suffragettes were led by Mrs Emmeline Pankhurst was a great supporter of the use of aggressive means to gain her rights. In direct comparison to Millicent Garrett of the NUWSS (Suffragists), the difference is quite obvious. ...read more.

The WSPU also produced clever posters, broke windows, set fire to post boxes and fought the police when they were arrested. The NUWSS cause no such trouble throughout the war for the vote. The women's political representation was through no party, as no party would fully support either group. Although there were individuals within the political parties the parties in their entirety who would claim to support women, the right to vote was not popular enough to be suggested by any. The Prime Minister did not want to back down to the attacks of violence from the Suffragettes, possibly implying that the Suffragists methods were more constructive in the fight. The WSPU were not successful during any campaign of violence. ...read more.

They allowed the Government access to their funds and set up many organisations such as the VADs (Voluntary Aid Detachment). The women proved their worth by working long hours in such forces as the WAACs (Women's Auxiliary Army Corps). This is more than likely to have influenced the Governments decision to relent and give the vote after the war. The methods of action for the Suffragists and -Gettes varied greatly during their campaigns, but often crossed each others boundaries. The result they wanted was the same, but they were coming in a pincer movement, from opposite sides, to get the Government to give them what they wanted. The war effort made by the NUWSS was one of the major influences on the British Government, but it was by no means the only one. ...read more.