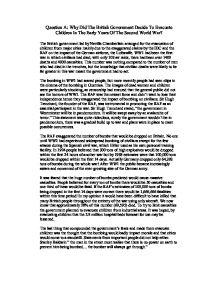 Question A: Why Did The British Government Decide To Evacuate Children In The Early Years Of The Second World War?

Question A: Why Did The British Government Decide To Evacuate Children In The Early Years Of The Second World War? The British government led by Neville Chamberlain arranged for the evacuation of children from major cities mainly due to the exaggerated claims by the IDC and the RAF on the impact of the German airforce, the Luftwaffe. WW1 had been the first war in which civilians had died; with only 103 air raids, there had been over 1400 deaths and 4000 casualties. This number was nothing compared to the number of men who had died in the trenches, but the knowledge that civilian deaths were likely to be far greater in this war meant the government had to act. ...read more.

The RAF exaggerated the number of bombs that would be dropped on Britain. No one until WW2 had experienced widespread bombing of civilians except for the few attacks during the Spanish civil war, which Hitler used as his own personal training facility. In 1924 people believed that 300 tons of high explosives would be dropped within the first 24 hours of another war but by 1938 estimates were that 100,000 tons would be dropped within the first 14 days. Actually Germany dropped only 64,393 tons of bombs during the whole war! After WW1 the public became increasingly aware and concerned of the ever-growing size of the German army. It was feared that the huge number of bombs predicted would cause massive casualties. ...read more.

Statements from important people did not help either. Stanley Baldwin " the man in the street must realise that there is no power on earth to prevent him being bombed... the bomber will always get through." In conclusion I believe the most important reason for evacuation was that the government believed the exaggerated estimates provided by the IDC and RAF. They were concerned about the effect on the public's morale if the predicted levels of bombing and deaths occurred, especially if the victims were children. If Hitler had bombed during what is now known as the "Phoney War" and the government hadn't evacuated children then they would have been severely criticised and probably kicked out of office at the next election. My information makes me think that it was understandable for the government to want children evacuated, they were acting in the public's best interest. ...read more.