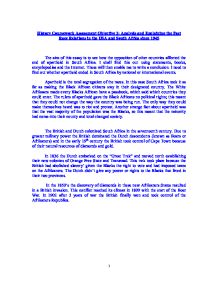 Race Relations in the USA and South Africa since 1945 : How external pressure brought down Apartheid.

History Coursework Assessment Objective 2: Analysis and Explaining the Past Race Relations in the USA and South Africa since 1945 The aim of this essay is to see how the opposition of other countries affected the end of apartheid in South Africa. I shall find this out using statements, books, encyclopedias and the Internet. These will then enable me to write a conclusion. I need to find out whether apartheid ended in South Africa by national or international events. Apartheid is the total segregation of the races. In this case South Africa took it as far as making the Black African citizens stay in their designated country. The White Afrikaans made every Blacks African have a passbook, which said which countries they could enter. The rulers of apartheid gave the Black Africans no political rights; this meant that they could not change the way the country was being run. The only way they could make themselves heard was to riot and protest. Another strange fact about apartheid was that the vast majority of the population was the Blacks, so this meant that the minority had come into their county and total changed society. The British and Dutch colonized South Africa in the seventeenth century. ...read more.

The United Nations soon imposed a trading boycott in 1962, this was to try and get the government to reverse the policy of Apartheid. This was the first step that the international countries took to try and make an end of Apartheid. However trading boycotts prove to be ineffective, this was because in the 1960s they found that South Africa had large amounts of Gold and Diamonds as natural recourses. After the Sharville massacre, investors started to withdraw their money from South Africa, this was because there was a fear of a civil war breaking out. The investors in the 1960s some how managed to pump money into South Africa even though there had been a trading boycott and economic sanctions. The money that was put into South Africa kept them a wealthy country. Economic Sanctions brought a higher standard of living and a better wage to Native Black citerzans, but still there were no political freedom. Foreign govements soon started to cut sporting links with South Africa in particular Rugby and Cricket, which were the most popular for the Whites. In 1968 an African-born cricketer called Basil D'Oliveria was a member of the British Cricket Team, when they were touring South Africa he was refused entry of one of the states. ...read more.

If they had their Buffer Zone they would have a protective wall that would surround their country. The whites of South Africa were becoming worried about the Blacks reclaiming there power and political rights, this meant that when the majority of Blacks were to vote they could then take over the government of South Africa. I think that the International boycotts helped the end of Apartheid, this is because it showed South Africa the anger of the world towards the way they treated the Blacks South Africans. The boycotts did not end Apartheid they were more of a gesture to show the Blacks that they had support in their actions against Apartheid. In conclusion and though sufficient evidence, I think that the importance of the International input to Apartheid had little affect on the end result. The affect that the international opposition had on Apartheid was just to say that they were behind the Blacks movements and to say to South Africa that what they were doing was wrong. The Blacks of South Africa did more to the end Apartheid because they actually held the protests that made the changes. The Blacks had managed to come from a life of poverty and an uneducated child life. So my interpretation of the Coursework question is that the international input was useful to the end of Apartheid but did very little to end it ?? ?? ?? ?? 1 ...read more.