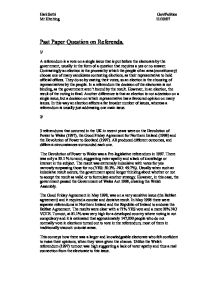 Referendums. Although Referendums can provide clear decisive answers on difficult political issues, they also have many disadvantages to them.

Past Paper Question on Referenda. 1/ A referendum is a vote on a single issue that is put before the electorate by the government, usually in the form of a question that requires a yes or no answer. Contrastingly an election is the process by which the people of an area (constituency) choose one of many candidates contesting elections, as their representative to hold official offices. They do so by casting their votes, so an election is the choosing of representatives by the people. In a referendum the decision of the electorate is not binding, as the government aren't bound by the result. However, in an election, the result of the voting is final. Another difference is that an election is not a decision on a single issue, but a decision on which representative has a favoured opinion on many issues. In this way an election affects a far broader number of issues, whereas a referendum is usually just addressing one main issue. ...read more.

Unlike the Welsh referendum (1997) turnout was high suggesting a lack of voter apathy and thus a real connection from the electorate to this issue. The result of this referendum is a clear YES and reinforced the importance and usefulness of a referendum on simple answer (but complicated) issues. The government in response to this result passed the Northern Ireland Act 1998. The Scottish referendum in 1997 was a pre-legislative referendum ,over whether there was support for the creation of a parliament for Scotland and whether there was support for a parliament with tax varying powers. Voter turnout was adequate with 60.1% voting and the result was once again a decisive one with 74.3% voting YES and 25.7% voting No. The electorate were well informed and therefore showed great interest in the political issue, as opposed to previous referendums (1979 -far more indecisive result). The Scottish public voted in favour for tax raising powers for the Scottish parliament and therefore, n response to the majority voting for both proposals, the United Kingdom Parliament passed the Scotland Act in 1998, creating the Scottish Parliament and Scottish Executive. ...read more.

Referendums are also victim to the media and other agencies who can significantly influence a result, making them invalid or causing "unjustified" change in opinion e.g. Rich pressure groups, who may cause voters to be swayed by emotion rather than reason. A regular occurrence with referendums however, is that of low turnout and voter apathy towards issues. This can harm the referendum by creating a result lacking in credibility. An example of low turnout and voter apathy is the November 2004 referendum on whether there should be a North East Assembly; here there was only a 48% turnout indicating a fairly low level of interest on the subject and high levels of voter apathy. This meant that the result (a resounding no by 78%) lack validity. A concluding failure of referenda is that the decisions made are not final, as the government can go back on them if they want. This undermines the whole process and creates a weakened system of representative democracy. Hari Sethi Gov/Politics Mr Hitching 11/10/07 ...read more.