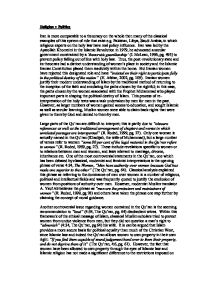 Religion v Politics Iran is more comparable to a theocracy on the whole then many of the classical examples of this system of rule that exist e.g. Pakistan, Libya, Saudi Arabia, in which religious experts on the holy law have real policy influence. Iran was led by the Ayatollah Khomeini in the Islamic Revolution in 1979, he advocated a secular government constrained by a 'theocratic guardianship' (I. McLean, 1996, pg. 495) to prevent policy falling out of line with holy law. Thus, the post-revolutionary state and its theocrats had a distinct understanding of women's place in society and the Islamic Iranian Constitution placed them resolutely within the home. But Iranian women have rejected this designated role and have "insisted on their right to participate fully in the political destiny of the nation" (H. Afshar, 2002, pg. 109). Iranian women justify their modern understanding of Islam by the traditional method of returning to the inception of the faith and emulating the paths chosen by the rightful; in this case, the paths chosen by the women associated with the Prophet Muhammad who played important parts in shaping the political destiny of Islam. This process of re-interpretation of the holy texts was a task undertaken by men for men in the past. ...read more.

Modern Western historians have usually cited foreign, Graeco-Roman or Sassanian Persian concepts and Institutions as the sources of Islamic government. As a scholar and judge who undertook various posts in government service, Mawardi (364-450) was uniquely placed to compose a classic work of Islamic public law. His approach is that of a Muslim scholar and his rules of public administration are derived from the Qu'ran, the hadith and the opinions of legal experts. Mawardi's interpretation of the Qu'ran was towards the subordination of women. Crucial to the question of the Islamicity of state and society are the laws and rules of family relations and female demeanour. Apart from the symbolic and highly visible hejab, which continues to be enforced, the Republic has retreated on many fronts. The Family Protection Laws of the ancient regime were at first denounced as un-Islamic and repealed in favour of the classic Shari'a provisions giving husbands and fathers wide powers (control of wives, renunciation at will, custody, denial of alimony) to the detriment of women and children. Khomeini also ruled that family planning and birth control were forbidden to Muslims, and abolished the programmes initiated by the previous regime, denouncing them as "imperialist conspiracies against Islam" (Zubaida, 2000, pg.65). ...read more.

Historically and culturally these are indications of men. These words and phrases clearly eliminate women. In Iran, the country of popular revolution that became Islamic, there is now a move away from Islamic government. Islamic ideology and institutions, in becoming part of the state and politics, lost their sanctity and charisma. They became "embroiled in factional fights and transparently corrupt practices" (Zubaida, 2000, pg. 66). Khomeini's successor as Leader is not distinguished by religious rank or charisma; rather Khamenei is associated as a political appointment. These developments have the effect of "distancing Islam from politics and government, in favour of a new Muslim humanism" (Zubaida, 2000, pg. 67). The conservative forces typically and strenuously resist these innovations and departures. The constitution clearly displays signs of a democracy that if followed could be implemented in Iranian politics. The problem lies in the fact that the real power lies in the hands of the Spiritual Leader Khamenei who places precedence on the Islamic scriptures and religion. Within this context it can be argued that women may possibly never be equal to men, as the roots of this ideology lie powerfully embedded in the Qu'ran "because God has made one superior to the other" (The Qu'ran, 4:34, pg. 64). 1 www.oefre.unibe.ch/law/icl/ir00t__.html 2 ibid ...read more.