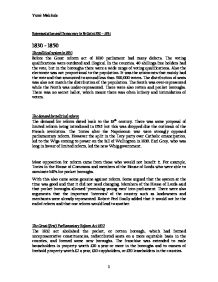 Representation and Democracy in Britain 1830 - 1931 1830 - 1850 The political system in 1830 Before the Great reform act of 1830 parliament had many defects. The voting qualifications were outdated and illogical. In the counties, 40 shillings free holders had the vote, but in the boroughs there were a wide range of voting qualifications. Also the electorate was not proportional to the population. It was the aristocrats that mainly had the vote and that amounted to around less than 500,000 voters. The distribution of seats was also not match the distribution of the population. The South was over-represented while the North was under-represented. There were also rotten and pocket boroughs. There was no secret ballot, which meant there was often bribery and intimidation of voters. The demand for political reform The demand for reform dated back to the 18th century. There was some proposal of limited reform being introduced in 1785 but this was dropped due the outbreak of the French revolution. The Tories after the Napoleonic war were strongly opposed parliamentary reform. However the split in the Tory party over Catholic emancipation, led to the Wigs coming to power on the fall of Wellington in 1830. Earl Grey, who was long in favour of limited reform, led the new Whig government. Most opposition for reform came from those who would not benefit it. For example, Tories in the House of Commons and members of the House of Lords who were able to nominate MPs for pocket boroughs. With this also came some genuine against reform. Some argued that the system at the time was good and that it did not need changing. Members of the House of Lords said that pocket boroughs allowed 'promising young men' into parliament. There were also arguments that the important 'interests' of the country such as landowners and merchants were already represented. Robert Peel finally added that it would not be the end of reform and that one reform would lead to another. ...read more.

Following a 1900 conference in London with the TUC, the Social Democratic Federation, the Fabians, and the Independent Labour Party, the Labour Representation Committee was formed to fight the General Election; their aim was to represent working class interests in Parliament. They were able to win two seats in the election. After this, working class and trade union support grew, and they were able to win more seats in by-elections. However, the real breakthrough came in 1906 when they won 29 seats in the General Election. They had made a deal with the Liberals, who agreed not to contest Labour candidates in certain seats, mainly because they didn't want to risk losing three horse contests where Conservative support was weak and where splitting the support against the Conservatives may have actually let that party win. It is from then on that the party became known as the Labour Party. Keir Hardie Keir Hardie was born in a Lanarkshire hamlet in August 1856. With a working life spent at the 'coalface', together with an exposure to the cruel and brutal regimes that were often operated by the pit owners, would have a profound effect on the adolescent Hardie. By the time he was a young man his experiences had convinced him that the only fair way to organise society was using socialist principles. He put this belief into practice by attempting to organise his own and other pits in the Scottish coalfield where he worked into a union. In 1886, at the age of twenty he became the Secretary of the Scottish Miners Federation. The failure of the miners in an industrial dispute the following year led Keir to the belief that what was needed was a more rounded, political formation that would campaign for the rights of working people. Initially, he believed that this would come about through a coalition with the liberals. By 1888 however, he became disillusioned with this. ...read more.

Rising unemployment and post-war economic depression would put a severe spanner in the works for the Conservatives, and in 1926, the famous general strike took place. This ultimately failed and convinced many that the only way to achieve effective change was through political debate. Labour support increased, and widespread disillusionment with the way the Conservatives handled the economic situation helped Labour to victory in the 1929 elections The 1928 Equal Suffrage Act After the passing of the Qualification of Women Act in 1918 the NUWSS and WSPU disbanded. A new organisation called the National Union of Societies for Equal Citizenship was established. As well as advocating the same voting rights as men, the organisation also campaigned for equal pay, fairer divorce laws and an end to the discrimination against women in the professions. In 1919 Parliament passed the Sex Disqualification Removal Act which made it illegal to exclude women from jobs because of their sex. Women could now become solicitors, barristers and magistrates. Later that year, Nancy Astor became the first woman in England to become a MP when she won Plymouth in a by-election. Other women were also elected over the next few years. In 1923 Margaret Bondfield was elected as Labour MP for Northampton. When Ramsay McDonald became Prime Minister in 1924 he appointed Bondfield as parliamentary secretary to the Minister of Labour. Five years later Bondfield became the first woman in history to gain a place in the British Cabinet. A bill was introduced in March 1928 to give women the vote on the same terms as men. There was little opposition in Parliament to the bill and it became law on 2nd July 1928. As a result, all women over the age of 21 could now vote in elections. Many of the women who had fought for this right were now dead including Elizabeth Garrett Anderson, Barbara Bodichon, Emily Davies, Elizabeth Wolstenholme-Elmy, Constance Lytton and Emmeline Pankhurst. Millicent Fawcett, the leader of the NUWSS during the campaign for the vote, was still alive and had the pleasure of attending Parliament to see the vote take place Yemi Makinde 1 ...read more.