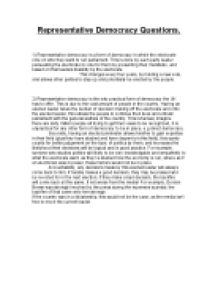 Representative Democracy in the UK

﻿Representative Democracy Questions. 1) Representative democracy is a form of democracy in which the electorate vote on who they want to run parliament. This is done by each party leader persuading the electorate to vote for them by presenting their manifesto, and based on that leaders likability by the electorate. This changes every four years, by holding a new vote, and allows other parties to step up and potentially be elected by the people. ...read more.

This is factual, imagine there are sixty million people all trying to get their views to be recognized, it is unpractical for any other form of democracy to be in place, e.g direct democracy. Secondly, having an elected priminster allows him/her to gain expertise in their field (plus they have studied and have degree's in this field), this surely counts for better judgement on the topic of politics by them, and increases the likelyhood their decisions will be logical and in good practice. ...read more.

Accountability, any decisions made by this elected leader will always come back to him, if he/she makes a good decision, they may be praised and be re-voted for in the next election, if they make a bad decision, the backfire will come back all the same, if not worse from the media! For example, Gordon Brown was strongly knocked by the press during the expenses scandal, the backfire of that came onto him strongly. If the country was in a dictatorship, this would not be the case, as the media isn't free to mock the current leader. ...read more.