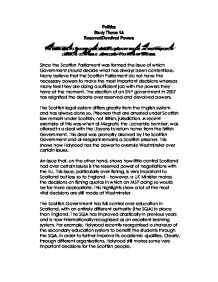 Politics Study Theme 1A Reserved/Devolved Powers The distribution of reserved and devolved powers means the most important decisions continue to be made at Westminster. Discuss. Since the Scottish Parliament was formed the issue of which Government should decide what has always been contentious. Many believe that the Scottish Parliament do not have the necessary powers to make the most important decisions whereas many feel they are doing a sufficient job with the powers they have at the moment. The election of an SNP government in 2007 has reignited the debate over reserved and devolved powers. The Scottish legal system differs greatly from the English system and has always done so. ...read more.

This issue, particularly over fishing, is very important to Scotland but less so to England - however, a UK Minister makes the decisions on fishing quotas in which an MSP doing so would be far more appropriate. This highlights show a lot of the most vital decisions are still made at Westminster. The Scottish Government has full control over education in Scotland, with an entirely different authority (the SQA) in place than England. The SQA has improved drastically in previous years and is now internationally recognised as an excellent learning system. For example, Holyrood recently reorganised a shakeup of the secondary education system to benefit the students through the SQA, in order to further improve its academic qualities. ...read more.

However, on the other hand, the Scottish Parliament also has the power to refuse Westminster's wishes to site new power stations in Scotland. This is since Scotland has control over planning rights, and can refuse these permissions from the Westminster over and over again. This highlights that Holyrood still has the power to control every part of Scottish soil, allowing it to utilise every square inch as it sees fit and allowing it to refuse to surrender it to others. On the whole, the evidence to suggest that Holyrood does have some significant powers, but Westminster still controls the majority of the powers that are vital to Scottish people. In the future, Holyrood will require fiscal autonomy from Westminster as well as a variety of other powers, in order to claim it governs all of Scotland's interests. ...read more.