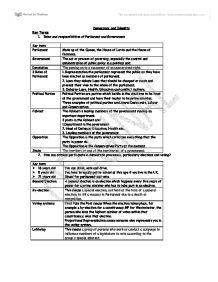 Democracy and Identity Key Terms 1. Roles and responsibilities of Parliament and Government: Key term Parliament Made up of the Queen, the House of Lords and the House of Commons. Government The act or process of governing, especially the control and administration of public policy in a political unit. Devolution The passing on to a successor of an unexercised right. 3 Roles of Parliament 1. Representation-the parliament represent the public as they have been elected as members of parliament. 2. Laws-they debate Laws that should be changed or made and present their view to the whole of the parliament. 3. Debates-Laws, Health, Education and conflict matters. Political Parties Political Parties are parties which battle in the elections to be head of the government and have their leader to be prime minister. Three examples of political parties are Liberal Democrats, Labour and Conservatives. ...read more.

By-election This means a special election, not held at the time of a general election, to fill a vacancy in Parliament due to a death or resignation. Voting systems First Pats the Post means When the election takes place, for example a by-election for a constituency MP for Westminster, the person who wins the highest number of votes within that constituency, wins that election. Proportional Representation means someone else represents you in the voting system. Lobbying This means a group of persons who work or conduct a campaign to influence members of a legislature to vote according to the group's special interest. 3. The origins and implications of the diverse national, regional, religious and ethnic identities in the United Kingdom and the need for mutual respect and understanding Key term Definition Multiple identities This means you have more than one identity either in Media or in your career. ...read more.

Tolerance This means a fair, objective, and permissive attitude toward opinions and practices that differ from one's own. Respect This means to be courteous and show good manners to your peers. 4. How can ethnic identity, religion and culture affect community life? How can individuals, schools and communities promote equal opportunities and community cohesion? Key term Multicultural This means pertaining to, or representing several different cultures or cultural elements for example a multicultural society. Immigration This means when a group or a person who enter or settle in a new country or region. One advantage of immigration is it helps people get a better job or start a new/better life. One disadvantage of immigration is they can illegally immigrate to countries causing the government to have to pay for them. Community This means a social group of any size whose members reside in a specific locality, share government, and often have a common cultural and historical heritage. ?? ?? ?? ?? ...read more.