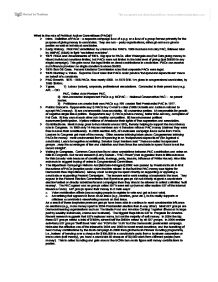 What is the role of Political Action Committees (PACs)? > Intro. Definition of PACs - a separate campaign fund of a p.g. or a fund of a group formed primarily for the purpose of giving money to candidates. They are non - party organisations, although some do give to parties as well as individual candidates. > Early History. First PAC established by unions in the 1940's. 1963 Business Industry PAC, followed later by AMPAC (AMA) to fight "socialised medicine". > 1971 FECA and Amendments of 1974. Big spur to PACs. After Watergate era (Fat Cats giving money to Nixon) individual donations limited, but PACs were not limited in the total level of giving (just $5000 to any single campaign). This gets round the legal limits on direct contributions to candidates. PACs can receive such finance provided no single donation is above $5000. > 1975 Sun Oil Case. Federal Elections Commission ruled that corporate PACs were legal. > 1976 Buckley v. ...read more.

In 2000 election 40% of candidates campaign funds came from PACs. Leaders in Congress get most of the money. Often reverse lobbying takes place- Congressmen lobbying PACs for money. most controversial form of spending is on "independent expenditure" (for /against a candidate). Leads to negative advertising. Senator Lloyd Bentson said "These so-called independent groups...reap the advantages of lies and distortion and then force the candidate to spend funds to set the record straight". > Voting in Congress. Common Cause has found clear correlations between PAC contribution and votes on Bills in Congress. But recent research (Larry Sabato - 'PAC Power') has suggested there is little evidence for this (usually vote because of constituents, ideology, party, leaders, influence of White House). Also little evidence to suggest buying of votes in Congressional Committees. > The Bipartisan Campaign Reform Act (McCain-Feingold) 2002 was passed by President Bush to limit the actions of PACs (sceptics would claim that this related to the fact that PAC money was higher for Democrats than Republicans). ...read more.

The biggest Republican 527 is Progress for America. Recent research suggests that 527s replaced some, but not the majority of soft money. In 2004 the big three 527 groups raised a total of $186m, almost half the $405m raised by all 527 groups. In 2004 smaller anti-Kerry 527 groups 'Swift Boat Vets' and 'POWs for Truth' hurt the Democratic presidential campaign. Note also the effective use of the internet in 2004 and 2006 to boost small donations, and the bundling of hard money contributions by the Bush campaign in 2000 through the Bush Pioneer bundling programme, i.e., instead of handing over a cheque for $100,000 to a candidate's party from a business corporation or trade union (soft money), you hand a candidate 50 cheques of $2,000 each from different people (hard money). This is called bundling and gets around the BCRA ban on six figure soft money contributions to parties. > Recent Moves for Reform. Every year there are further suggestions for reform (including banning PACs, reducing funding). However surveys show that most people prefer PACs, rather than having to pay for campaigns through taxation (Time/CNN poll). ...read more.