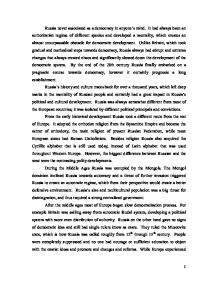 Russia - political past, present and future

Russia never associated as a democracy in anyone's mind. It had always been an authoritarian regime of different species and developed a mentality, which creates an almost unsurpassable obstacle for democratic development. Unlike Britain, which took gradual and methodical steps towards democracy, Russia always had abrupt and extreme changes that always created chaos and significantly slowed down the development of the democratic system. By the end of the 20th century Russia finally embarked on a pragmatic course towards democracy, however it certainly prognosis a long establishment. Russia's history and culture traces back for over a thousand years, which left deep marks in the mentality of Russian people and certainly had a great impact in Russia's political and cultural development. Russia was always somewhat different from most of the European countries; it was isolated by different political principals and convictions. From the early historical development Russia took a different route from the rest of Europe. It adopted the orthodox religion from the Byzantine Empire and became the center of orthodoxy, the main religion of present Russian Federation, while most European states had Roman Catholicism. Besides religion Russia also acquired the Cyrillic alphabet that is still used today, instead of Latin alphabet that was used throughout Western Europe. However, the biggest difference between Russian and the west were the contrasting polity developments. During the Middle Ages Russia was occupied by the Mongols. The Mongol dominion inclined Russia towards autocracy and a threat of further invasion triggered Russia to create an autocratic regime, which from their perspective would create a better defensive environment. Russia's size and multicultural population was a big threat for disintegration, and thus required a strong centralized government. After the middle ages most of Europe began slow democratization process. For example Britain was sailing away from autocratic feudal system, developing a political system with more even distribution of authority. Russia on the other hand gave no signs of democratic idea and still had single rulers know as czars. ...read more.

The public cannot accept the fact that such a massive and strong country cannot suppress a couple terrorist groups in Chechnya. This played a big role during all presidential elections and plays a tremendously significant role in Russia's political and social development. Censorship and strict control over media was always an attribute of an autocratic government. Throughout history Russia experienced strong censorship during the Czarist and Soviet periods. When Yeltsin came to power, he created a much more liberal criterions on censorship and freedom of speech. If Russia is striving to acquire democracy, then why did the new President Vladimir Putin bring back the controlled press and media? Soon after his inauguration, the most popular television channel in Russia HTB was placed under a big controversy. Putin felt that HTB revealed Russian government and the president himself from a "wrong" angle and band the channel by getting rid of the HTB owner and the rest of his crew. The HTB soon reappeared under a new supervision. This act was followed by significant disapproval of public as well as of the Duma. Many Russian citizens filled the streets with demonstration posters feeling that the weak developing democracy and their freedom is being abused. The people felt that after attempting to leave the authoritarian system and establishing a new democratic one, Putin is trying to gear political development to a dictatorship. It is rather difficult to tell precisely where Putin's polity and actions will take Russia in the future. Will he develop a democracy or turn back to autocracy? Might sound a little poetic, but realistically speaking Russia is still far to match the examples of western democracies. The long established historical influence and mentality must be cleared away through generations and generations, before the people would be ready to accept democracy. For now Russia should attempt to make smart choices, which would push it towards the democratic dream. Who knows, maybe a several decades years later our great grandchildren would be writing papers and doing studies on the great Russian phenomenon: The great transition from complete autocracy to a most successful democracy. 1 ...read more.